May 09, 2012
KIEV, Ukraine -- He won fairly in February 2010. Since his election as Ukraine's president, however, Viktor Yanukovych has mauled his country's fragile democracy and weak institutions. 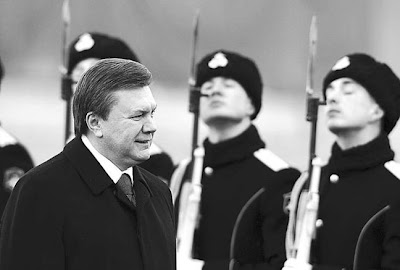 Ukrainian President Viktor Yanukovych reviews the honour guard near Moscow during a visit to Russia in 2010.
He has bullied the media, tampered with the judiciary, exercised arbitrary power and presided over an upsurge of corruption.
To see how badly he has gone wrong, consider the show trial, imprisonment and maltreatment of Yulia Tymoshenko, his losing opponent in 2010, who is now on a hunger strike.
Yanukovych had no real reason to fear Tymoshenko.
She is no angel, and lost much of her popularity after the 2004 "orange revolution" for her erratic style and questionable business dealings.
He has chosen to persecute her all the same, however, adding fresh charges to keep her in prison longer.
He has done this despite a clear message from the European Union that her release is a condition for implementing a much-delayed association agreement, which would open EU markets to Ukrainian exports.
In some ways, Yanukovych is using tactics similar to those of his autocratic neighbor, Alexander Lukashenkov, in Belarus.
He has flirted alternately with Europe and Russia in the hope of extracting concessions from both, yet yielded nothing serious to either.
He wants the association agreement and he needs western support for another IMF bailout this summer.
Should he get neither, he may turn to Moscow for help -- which he would get only with unpleasant conditions.
This probably will not end well for Ukraine.
The unfortunate Ukrainians find themselves not only at the mercy of their predatory ruler but also cut off from Europe.
It also creates a headache for the West.
The fear is that Yanukovych could allow his country to fall under Russia's sway.
Vladimir Putin, who was be inaugurated as Russia's president today, is pressing Ukraine to join a post-Soviet customs union instead of pursuing its EU deal.
The Russians also want to control Ukraine's gas-transit network, as they do in Belarus.
Such a setback after 20 years of western efforts to bolster Ukraine's independence is a grim prospect.
EU countries should make clear to Putin that it would damage their relations with Russia.

Fears of Russian influence must not be allowed to dictate a soft response to Yanukovych's autocratic ways.
He tends to treat friendliness as weakness, pocketing the proceeds.
Instead, the EU should tighten the screws on the president and his Donbas business associates while also finding ways to hold out hope to ordinary Ukrainians.
High-level political boycotts are a good place to start.
Several heads of state, including those of Germany and the Czech Republic, are rightly refusing to attend an East European summit with Yanukovych that will begin in Yalta on May 11.
The EU's political leaders -- but not its soccer teams -- also should boycott matches in Ukraine during the Euro 2012 football championships, which it is jointly hosting with Poland.

Off the field, the EU should press for fair parliamentary elections in October, sending as many observers as it can.
Financial supervisors must apply money-laundering laws stringently to the huge sums flowing out of Ukraine to Austria, Britain, Cyprus and elsewhere.
EU countries should withhold visas from those directly involved in the abuse of power.

At the same time, though, they ought to make it easier for other Ukrainians to visit the West for study, trade and tourism.
They also should do more to explain to Ukrainians the potential benefits of their association agreement, including the possibility that it might ultimately lead to EU membership.

The West's quarrel with Ukraine is with its president, not with its people.