May 31, 2012
KIEV, Ukraine -- Ukraine’s sex industry is banking on pulling in clients and cash during Euro 2012 but campaigners paint stark warnings given that the championship co-host has the highest rate of HIV infection in Eastern Europe. 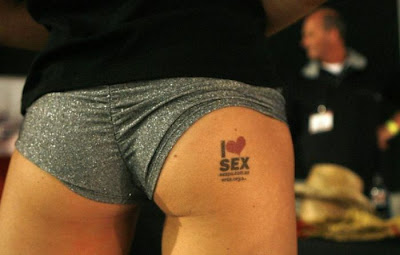 “Kiev’s prostitutes are preparing actively for Euro 2012,” one Ukrainian sex site said, claiming that some are even studying the history of the 16 nations taking part in the tournament, plus the basics of football, to get a competitive edge.
Ukraine transformed prostitution from a crime to a misdemeanour in 2006, with fines ranging from eight to 20 euros (£6.5-£16, $10-$25), while pimping or running a brothel remains a criminal offense.
The ex-Soviet republic is home to between 52,000 and 83,000 sex workers, with 11,000 in the capital Kiev alone, according to campaign group the International HIV/AIDS Alliance.
In the other tournament venues, Donetsk and Kharkiv in the east, the number is put at over 3,000, and Lviv in the west, almost 2,500.

Hundreds of thousands of fans are expected to flood in for Euro 2012, which kicks off on June 8 in Warsaw, capital of co-host Poland, and ends with the final in Kiev on July 1.

Ukrainian feminist group FEMEN — best known for its topless protests — warns that Euro 2012 could see a rise in sex tourism and is campaigning under the slogan “Ukraine is not a brothel”.

Working in a secret brothel set up in an apartment in Kiev, 24-year-old Natasha says she hopes to get enough clients to buy a car, even though she reckons most visitors will be caught up by the football.

“All men are the same and football and beer are more important for them but they aren’t going to spend the whole night drinking,” she told AFP in a telephone interview.

With an influx of fans from richer West European nations, many prostitutes are set to hike their rates, said Olena Tsukerman, who runs sex-workers’ rights organisation Legalife.

So-called VIP prostitutes, who speak foreign languages and currently charge between 100 and 200 euros ($125 and $250) an hour, could double or triple their fees, Tsukerman said.

However, she poured cold water on the idea of being able to rake in the cash.

“At the start, everyone’s going to raise their prices and wait for the influx. But the statistics suggest it won’t happen,” she said, noting that many brothels in 2006 World Cup host Germany made a loss.

“The experience of European countries shows that there’s no point expecting an influx of sex tourists. Foreign fans prefer to drink beer,” he said.

Tsukerman noted, however, that corrupt police officers are hiking the bribes they demand to turn a blind eye to brothels.

Prostitutes speaking on condition of anonymity said the sum was around $1,000 per phone number used by the brothel.

Fans who have sex with prostitutes will be taking an extra risk: Ukraine currently has Eastern Europe and Central Asia’s highest rates of HIV infection, with sexual intercourse having overtaken injecting drug use as the main form of transmission.

According to data from UNAIDS, at least 350,000 people aged 15 and over up in the nation of 46 million are living with the HIV virus that can lead to AIDS.

According to a 2011 study carried by the International HIV/AIDS Alliance, prostitutes are among the most-affected groups, with 24 percent HIV positive in Kiev and 38 percent in Donetsk.

While prostitutes and brothels contacted by AFP in Kiev said they were aware of the risks and used condoms, the study indicated that only 60 percent ruled out unprotected sex.

Some are prepared to have sex without a condom in exchange for an extra payment: while the figures for that category are still being processed, a 2010 survey indicated that 22 percent would do so.

On top of that, clients do not help.

“Ninety percent say they don’t want to use a condom,” according to former prostitute Irina.

Mindful of the problem, European football’s governing body UEFA has launched a campaign targeted at fans who have sex — not just with prostitutes — urging them to use condoms.

“Show HIV and AIDS the red card. The HIV virus doesn’t play fair, so you have to,” it says.