May 23, 2012
KIEV, Ukraine -- As the date of the largest football tournament EURO 2012 nears, Ukraine - the cohost of the event together with Poland - finalizes its preparations and finished a comprehensive overhaul of the Kiev International Airport terminal Zhuliany. 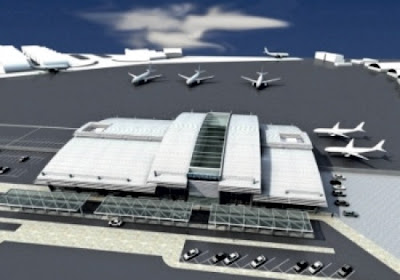 Scale model of new Zhuliany Kiev Airport.
The new 150,000 square foot terminal boasts the increased passenger output of up to 500 per hour with the capacity to service triple this amount if need be.

Located 8 km (4.97 miles) from downtown Kiev, Zhuliany International Airport is the second largest in the vicinity in addition to the country's main gateway Boryspil International Airport.
The new terminal is equipped with the latest and most advanced technology, according to the press service of the airport, that allows Ukrainian Border Guards to read biometric information contained in most passports.

"It will take us ten to twenty seconds to serve a passenger and then he or she can be on their way," said Kostiantyn Cherevatyi, Border Guard officer.
The terminal architects also designed a "departure gate extension feature" that permits servicing of up to 1,500 passengers per hour, comparable to international airports in Genoa and Bologna, Italy.

During the upcoming football tournament the new USD $50 million terminal will receive international charters including the ones with UEFA management as well with teams from Sweden, France, and England.

After the reconstruction of the landing strip and the upgrade of air traffic control and runway lighting systems the airport is able to receive Boeing 737 or Airbus A320 class vessels with full passenger payload.

Designed in 1924, it used to service only domestic flights. The number of passengers that come through this airport has increased 15 times in the last year compared to 2010.
In 2011 alone more than 469,000 passengers were serviced in Zhuliany airport, reported Oleksiy Yakovets, Director General of LLC Master Avia.

"We think Kiev is a great start to a new growth market, and there aren't too many of these in Europe," reported John Stephenson, Chairman of the Board of Wizz Air, serviced at the airport.
"We never expected to have such a great facility where we have 95 percent of the market in such great locations. We expect to see a lot of growth in the next few years," concluded Wizz Air executive.