Ukraine Flubbing Its Chance To Shine

May 15, 2012
KIEV, Ukraine — The Euro 2012 soccer championship in June is supposed to be Ukraine’s chance to shine: forge closer ties with the West, boost its international standing and aid its struggling economy. 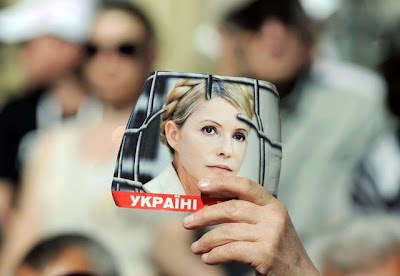 A supporter of former Ukrainian Prime Minister Yulia Tymoshenko holds a poster during a meeting of the country's opposition party in Kiev. Lithuania's president has warned Ukraine it could become isolated by the West over the imprisonment and deteriorating health of the jailed former prime minister.
Instead, it’s turned into a major headache.

In a move reminiscent of the Cold War, top EU officials have vowed to boycott matches held in Ukraine over the alleged mistreatment of jailed former Prime Minister Yulia Tymoshenko.

Critics warn that fans may be put off by exorbitant Ukrainian hotel prices and that the cash-strapped government has endangered the country by spending as much as $14 billion on the championship.

“The image, political and economic benefits — I don’t see any,” Mr. Rybachuk said.

Ukraine was awarded the Euro 2012 championship just as neighboring Poland was granted the 2007 championship to reward and promote the two football-loving ex-communist Eastern European countries.
Poland is an EU member and Ukraine is aspiring to join.

The Ukrainian economy was booming and the West was infatuated with the country after the 2004 pro-democracy mass protests known as the Orange Revolution brought to power a pro-Western government.

Mrs. Tymoshenko, the charismatic blond-braided Orange Revolution heroine and the top opposition leader, is serving a seven-year prison sentence for abuse of office.

Mrs. Tymoshenko, 51, has ended a three-week hunger strike that she started after prison guards allegedly folded her in a bedsheet and punched her in the stomach as she screamed for help.
She already was suffering from debilitating back pain.

German Chancellor Angela Merkel suggested she would only visit Ukraine during the championships if Mrs. Tymoshenko’s treatment improves.

“The lack of senior foreign officials attending the tournament is embarrassing for Mr. Yanukovych’s government and will continue to generate bad press for the country,” said Alex Brideau, a Ukraine analyst at Eurasia Group, a U.S.-based firm that advises on geopolitical risk.

In a further embarrassment, Ukraine had to cancel a regional cooperation forum of Central and Eastern European states after more than a dozen leaders refused to attend over the Tymoshenko case.

Financially, the country is also in a bad shape.

The global financial crisis nearly destroyed Ukraine’s economy, causing gross domestic product to plunge some 15 percent in 2009 and it has not fully recovered.

A $15.6 billion rescue loan from the International Monetary Fund has been frozen for more than a year due to Mr. Yanukovych’s reluctance to carry out unpopular austerity measures.

In this situation many wonder if Ukraine can afford Euro 2012.

The government says it has spent some $4.3 billion on building stadiums and upgrading roads and rail transport for the championship.
But total figures that would include construction of government-subsidized hotels, promotional campaigns and staff training have not been released.

The Kiev-based consultancy Da Vinci Analytic Group estimates that Ukraine will spend a total of least $14 billion on hosting the championship, most of it coming from government coffers.

The group estimates that up to $8 billion of that amount will not be returned in the medium term, as tourism is unlikely to significantly rise after the championship.

Co-host Poland will spend even more — $29 billion on upgrading its infrastructure to host the event, according to official figures, but 40 percent of that will be covered by EU funds.

“This is a staggering amount of money to spend on the European championship,” Simon Chadwick, professor of sport business strategy and marketing at Coventry University, said of Ukraine.

He added that much wealthier Britain will spend some $16 billion on the Summer Olympics in London.
“In terms of economic returns, was that the best way to spend the money?”

“I am convinced that Ukraine needs this project very much,” said Markian Lubkivsky, director of UEFA Euro 2012 in Ukraine. “We are getting integrated into the European community … this is a geopolitical project.”

“We are going to be left with modern infrastructure … we are going to receive lots of guests and I hope that many of them will visit our country in the future.”