May 07, 2012
MOSCOW, Russia -- A Russian film released on the eve of Ukraine's hosting of Euro 2012 tells the stirring story of the notorious "Match of Death" played between Soviet footballers and Nazi occupiers in Kiev during World War II. 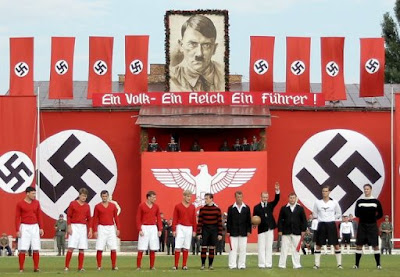 "Match of Death " is based on the true story of Soviet footballers who played against the Nazis in Kiev 70 years ago.
But the film has reopened still raw wounds in Ukraine and has been accused of anti-Ukrainian bias for its depiction of some locals willingly collaborating with the invading German forces.
The film, "Match," is set in the occupied Ukrainian capital in 1941 and 1942.
It is based on the true story of a team of Soviet footballers who played a series of matches against the Nazis 70 years ago.
It shows the Soviet players irking the occupiers with victory after victory.
The Nazis then arrange a showpiece game in a swastika-covered stadium to prove their superiority.
Under pressure to lose for propaganda purposes, the Soviet side, called Start, refuses to throw the match and wins it, knowing it will lead to their deaths.
-- "I can't decide for everyone, but my vote is for victory," says the goalkeeper hero, Nikolai Ranevich, in the dressing room at half-time.
-- "But they'll kill us," objects a teammate.
-- "That's a minus, but we'll get over it," he says deadpan.
Shortly after the match, later dubbed the "Match of Death," the Nazis arrested winning team members and sent them to a concentration camp where a number of them were shot.
The sweeping patriotic drama went on release in Russia and Ukraine on May 1, in time for Victory Day celebrations on May 9 and Ukraine's controversial hosting of the Euro 2012 football championship in June.
The film was 70 percent financed by a Kremlin fund set up to promote patriotic cinema and stars one of the country's most popular actors, Sergei Bezrukov, as Ranevich.
Its posters in Russia include a message wishing the national side good luck in the Euro 2012 competition.
"We should show this film to our football team," Bezrukov told journalists after training for the role with former Russia goalkeeper Sergei Ovchninnikov.
But it has angered some Ukrainians with its unflattering depiction of local collaborators enthusiastically welcoming the Nazis and carrying out their orders.
"Let them do the shooting!" a Nazi commander orders local police wearing armbands in the yellow-and-blue colours of the Ukrainian national flag.
And flower-garlanded women hand the traditional welcome of bread and salt to Nazi troops as the new city mayor hangs up a portrait of Hitler.
After delays and protests by nationalist groups, Ukraine's cinema agency finally allowed the release of the film for viewers over 18.
The film's dramatic version of events is also matter of debate, with some historians agreeing that the players were not necessarily pressured to fix the match and were later shot for different reasons.
Indeed a German probe that closed in 2005 concluded there was no evidence the men were shot because of their playing the match, a fact mentioned in the film's final titles with a heavy dose of irony.
"It all happened," said producer Dmitry Kulikov, a history graduate, at a press screening.
"There is no legend. These are facts. And yes -- there are different interpretations."
The film ends with a dark screen and a brief subtitle that the men only enjoyed "seven happy days" after their victory.
One player died under interrogation. The others were taken to the Syrets Nazi concentration camp outside Kiev.
Three were shot including goalkeeper Mykola Trusevich, the prototype of Bezrukov's hero. Five others survived.
Kulikov said the film deliberately did not show what happened to the players, instead focusing on their choice to beat the Nazi side at all costs -- which he is convinced was a heroic one.
"Actually this is the main event -- not how they (the Nazis) later took revenge on them. Of course they had a choice," he insisted.
The powerful story featured in a 1962 Soviet film called "Third Time."
It also famously inspired the 1981 US film "Escape to Victory" which starred Sylvester Stallone in the goalkeeper role and moved the action to a German camp for Allied prisoners of war.
The film has had mediocre reviews in Russia, however, with critics accusing it of trivialising events.
The film "uses the most primitive emotional cliches," wrote the Kommersant business daily.
"The historical plot is very strong and serious ... but 'Match' is just another pot-boiler with white-teethed and well-groomed media-friendly actors, dressed up in overly glamorous outfits," wrote Nezavisimaya Gazeta.