May 08, 2012
BERLIN, Germany -- The daughter of jailed former Ukrainian Prime Minister Yulia Tymoshenko met with Germany's justice minister on Monday in a quest to foster more European pressure on the Ukrainian leadership. 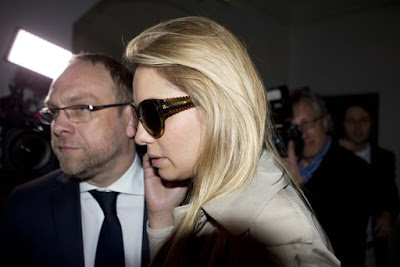 Yulia Tymoshenko has been on hunger strike for about two weeks and needs medical treatment for a back condition.
She is serving a seven-year prison sentence on charges of abuse of power, a case the West has strongly condemned as politically motivated.

German government spokesman Steffen Seibert said German Chancellor Angela Merkel won't meet Eugenia Tymoshenko on Monday, but "is up to date on all the developments of the Tymoshenko case."

Eugenia Tymoshenko made no comments as she walked toward her meeting with the minister, but she is set to hold a press conference with lawmakers from Merkel's party later Monday.

Germany has offered to treat Tymoshenko, but Kiev has rejected the offer.
Instead, Tymoshenko reportedly agreed to receive medical treatment in a Ukrainian facility in the presence of one German doctor starting Tuesday.

Germany has been leading Europe's critical stance on Ukraine's handling of the Tymoshenko case and those of other jailed prominent opposition politicians.