May 02, 2012
MOSCOW, Russia -- Pressure is mounting on Ukraine to clean up its human rights record ahead of the Euro 2012 finals next month, with the EU Commission's president the latest high-profile leader to boycott the football championships. 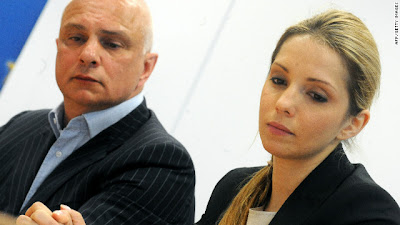 Tymoshenko's husband Oleksander and daughter Yevgenia hold a news conference to rally support. Yevgenia claims her mother's life is in danger since starting a hunger strike more than a week ago.
Just weeks before the tournament kicks off, president Jose Manuel Barroso has rejected an invitation to attend the final in Kiev -- citing concerns over the treatment of imprisoned opposition leader Yulia Tymoshenko.
"The president has decided that for the time being and in the present circumstances he doesn't want to travel to or attend any events in Ukraine," his spokeswoman told CNN on Tuesday.

She confirmed this was due to concerns over the treatment of former prime minister Tymoshenko, and added:
"The EU and president Barroso have sent strong signals of their serious concerns over what is happening in Ukraine."
Photos emerged on Friday of Tymoshenko covered in bruises which the 51-year-old claims that prison guards inflicted.
Officials have denied the allegations.

Tymoshenko, a fierce rival of president Victor Yanukovych, is serving a seven-year jail sentence for abuse of office and faces another trial on tax evasion charges.
Daughter Yevgenia said her mother's life is now in danger since starting a hunger strike more than a week ago, in a statement on the website of British newspaper the Guardian.
European leaders have continued to turn their backs on the June 8-July 1 event, which will be co-hosted by Poland, with the EU Justice Commissioner Viviane Reding also refusing to travel to the Ukraine.
German chancellor Angela Merkel is reportedly considering missing the tournament, with any such visit depending on Tymoshenko's release.
Her environment minister Nobert Rottgen has already urged Berlin government ministers to boycott matches.
Neither Ukraine nor Poland have previously hosted such a top-level sports event, which is run by European football's governing body UEFA.
UEFA president Michael Platini last month complained of "crooks and bandits" hiking hotel rates in Ukraine, while last Friday bombings in the city of Dnipropetrovsk raised security fears ahead of the tournament.

At least 30 people were injured, but Ukraine's government has assured UEFA it was taking "all necessary steps" to ensure the safety of around 1.3 million fans expected to watch 16 national teams go head-to-head.
No-one has claimed responsibility for the bombs, which were placed in four rubbish bins and exploded at short intervals, but some reports linked them to protests against Tymonshenko's treatment.
The attacks cast further doubt over Ukraine's's ability to stage such an event, and UEFA has taken the unprecedented step of raising political concerns with the East European nation.
"Even though UEFA, as a sports organization, never interferes in political matters, it has asked the Ukrainian delegation to convey these concerns to the competent authorities," it said.