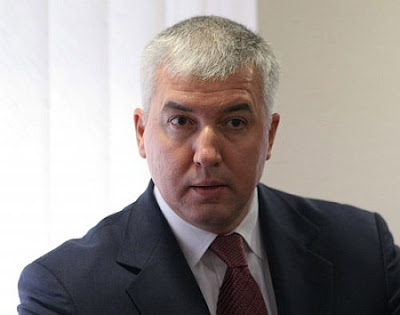 Dmytro Salamatin, until recently a Russian citizen known for his hot temper and personal loyalty to President Viktor Yanukovych, was appointed Ukraine's new defense minister on Wednesday.
The appointment, the third major reshuffle in the government in less than a month, follows a similar pattern with Yanukovych picking candidates based on personal loyalty.

“It’s obvious the key demand that Yanukovych had considered while appointing the military chief was the personal loyalty and readiness to implement any order,” Anatoliy Hrytsenko, a former defense minister and the head of the security committee in Parliament, wrote in his blog.

Salamatin, who was born and educated in Russia, had only moved to Ukraine 12 years ago as the Russian citizen, and only later had obtained the Ukrainian citizenship.

Salamatin was appointed as the head of Ukraine’s state arms exporting company Ukroboroneksport shortly after Yanukovych had won the presidency at the election two years ago.

“Salamatin did not prove himself to be a person who knows military policy or combat strategy,” Hrytsenko said.
“I’m not sure he fully understands at all the sector that he will now supervise.”

The reshuffle comes days after Yanukovych has appointed Ihor Kalinin, a former Russian KGB spy, as the head of the SBU security service.

Kalinin, who was also born and educated in Russia, had moved to Ukraine in 1990s to train Ukrainian spies at the SBU Academy.
Kalinin, who is believed to be personally loyal to Yanukovych, was in charge of the presidential guard service for the past two years.

Yanukovych last month replaced Fedir Yaroshenko with Valeriy Khoroshkovskiy as the country’s finance minister, apparently seeking to speed up negotiations over resumption of lending from the International Monetary Fund.

Yezhel resigned two days after a scandal had broken out over the defense ministry’s attempt to secure an approval of the Cabinet of Ministers for the transfer of 60 hectares of the ministry’s land to the presidential administration.

The land was supposed to be used for real estate development and for building homes.

Salamatin, as a member of Yanukovych’s Regions Party, is known to have several times participated in fist fights in Parliament by savagely attacking and injuring opposition lawmakers.

He is known to have broken the nose of Volodymyr Karpuk, an opposition lawmaker, who had protested ratification of the Kharkiv agreement, which had allowed Russia to extend the stay of its navy in Crimea for another 25 years through 2042.

“Now we know who will the defense ministry be defending,” Ihor Lutsenko, an observer at Ukrayinska Pravda, said.
“Now we know how they will do it.”