February 20, 2012
KIEV, Ukraine -- The Party of Regions has acted as an insurance agency and protection racket for former state officials accused of abuse of office by giving them parliamentary seats and immunity from prosecution. 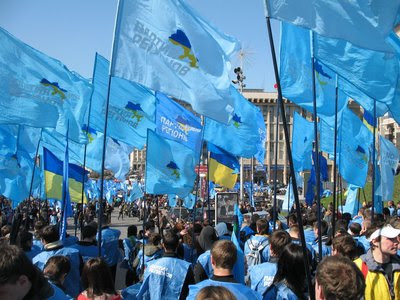 When the Party of Regions is in power their friends and defectors from the opposition are rewarded, while enemies are punished, particularly if there is an opportunity to extract revenge for past humiliations and betrayals.
Former Interior Minister, Yuriy Lutsenko, is on trial on trumped up charges as an act of revenge by the Yanukovych administration, because of his zeal in destroying the organized crime-Party of Regions nexus and putting the current Deputy Prime Minister, Boris Kolesnykov, in jail in 2005 on charges of extortion.

Political corruption is ingrained in eastern Ukrainian (Eurasian) political culture.
On four occasions since the 1998 elections, the former President Leonid Kuchma, Prime Minister and President Viktor Yanukovych have sought to bribe, blackmail and coerce opposition deputies to defect to them.

In 2000, the Viktor Yushchenko government found line items in the budget they inherited of payments of $1.5 million for deputies elected two years earlier in single mandate districts.
In 2002, the Liberal Party and trade unionists defected from Our Ukraine to the pro-presidential coalition.
In 2007, twenty Our Ukraine deputies defected to the Anti-Crisis coalition leading to Yushchenko’s decree to disband parliament.
In 2010, over sixty opposition deputies from Our Ukraine-Peoples Self Defense (NUNS) and the Bloc of Yulia Tymoshenko (BYuT) defected to the Stability and Reforms coalition.

Allegations have long circulated that since 2010 they have received bribes of between $1 million to $2 million lump sums and $25,000 monthly “salaries.”
NUNS deputy, Oles Doniy, revealed he had been offered $10 million for defecting to the Party of Regions and the second time $1 million plus a $20,000 monthly “salary”.
BYuT deputy, Roman Zabzaliuk, claimed he had been given $450,000 to defect to the Stability and Reforms coalition and a $25,000 monthly “salary”.
He taped the conversation with the offer of the bribe.
The lump sum has been donated to Batkivshchina (Fatherland), the party led by the imprisoned Yulia Tymoshenko.

A cable from the US Embassy in Kiev reported that, “(Industrial Union of Donbas co-owner Sergei) Taruta dismissed the whole Donetsk-Regions group, saying ‘they are all looters’”.
Former National Security and Defense Council Secretary, Volodymyr Horbulin, told US Ambassador to Ukraine John Herbst that the Party of Regions is “notable for its inclusion of criminal and anti-democracy figures”.
Another cable from the US Embassy in Kiev described the Party of Regions as, “long a haven for DONETSK-based mobsters and oligarchs,” led by “DONETSK CLAN godfather Rinat Akhmetov”.

The Party of Regions has given organized gang members places facilitating their election to parliament, local government and the Crimean parliament.
In the March 2006 elections to the Crimean parliament and local councils, hundreds of candidates who had “problems with the law,” according to then Interior Minister Lytsenko, ran in the Za Soyuz (For Union), For Yanukovych! and Kunitsyn election blocs.
Party of Regions deputy, Vasyl Kyselev, condemned the presence of “Seilem” organized crime gang leader Aleksandr Melnyk in the For Yanukovych! parliamentary coalition in the Crimean Parliament.
Yanukovych responded with the stern rebuke: “I take responsibility for him”.

In February 2012, Lutsenko addressed the court during his trial with a sensational disclosure related to when he was Interior Minister during the early period of Prime Minister Viktor Yanukovych’s 2006-2007 government. Lutsenko recalled:
“In the evening the three of us – Yanukovych, I and a chauffeur – drove to Mezhyhirya (Soviet era palace, now Yanukovych’s private residence), which had not then been ‘privatized.’"
"With music playing, the prime minister said to me, ‘Just don’t go after Sasha.’ I asked him, ‘Which Sasha?’ He replied, ‘Do not pretend (you do not know)... Sasha Melnyk.”

Melnyk was number 21 on the For Yanukovych! election bloc list to the Crimean parliament in the 2006 elections.
He is the leader of the organized crime gang “Seilem.”
Lutsenko replied to Prime Minister Yanukovych, “Viktor Fedorovych, there is a game called cops and robbers. Well, I am the cop.”
Yanukovych looked back at him with a startled face and Lutsenko recalled, “He thought I was kidding.”

Lutsenko claimed that the current Deputy Prosecutor-General, Renat Kuzmin, was responsible for Melnyk’s evasion of justice after the Party of Regions lobbied the prosecutor’s office not to press charges:
“Kuzmin signed arrest warrants for two gang members, but not for the boss. After his 72 hours of detention had expired, he was released, and went straight to Boryspil (airport),” adding, “Having all the evidence connecting the gang to murders, including that of the murder of a police officer, Deputy Prosecutor-General Renat Kuzmin releases the man who Yanukovych shelters, the head of an organized crime gang.”
Lutsenko also accused Kuzmin of “rehabilitating” another of Ukraine’s most notorious crime bosses, Givi Nemsadze, who led an organized crime gang that allegedly committed over 100 murders.

Lutsenko routinely complained that his efforts to fight corruption and organized crime received no support from President Yushchenko, whose two Prosecutor-General’s (Sviatoslav Piskun and Oleksandr Medvedko) were both Donetsk loyalists.
Ukraine has had a total of four Prosecutor-Generals from Donetsk in the last decade with Piskun (2002-2003, 2005), Henadiy Vasylyev (2003-2004), Medvedko (2005-2010) and Viktor Pshonka (since 2010).

The “Family,” the newly emerging clan surrounding President Yanukovych, is becoming one of the strongest clans in Ukraine.
Yanukovych may be seeking to emulate Russian Prime Minister Vladimir Putin whose fortune, according to the former Guardian correspondent in Moscow Luke Harding, is allegedly in the region of $40 billion.
This is at least $11 billion more than Russia’s wealthiest oligarch Oleg Deripaska.

The “Family” includes former organized crime figures from President Yanukovych’s hometown of Yenakievo in Donetsk oblast.
Yuriy Ivaniushchenko, who “is a key player in the family group,” is from Yenakiyeve and may have “a criminal past”.
“Yuriy Yenakovo,” as he has been nicknamed by the Ukrainian media, has been dogged by allegations that he has an organized crime past.