February 15, 2012
KIEV, Ukraine -- Ukrainian boxing star Vitali Klitschko warned on Tuesday that a "bloody uprising like in Syria" could start in his home country, which he said is now run by a "totalitarian regime". 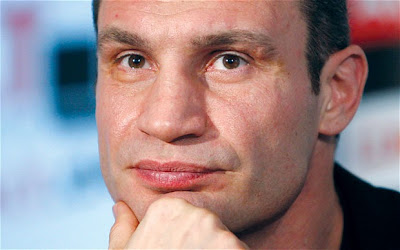 Ukrainian boxer Vitali Klitschko.
Ukraine "has become a totalitarian regime," Klitschko told the Abendzeitung in an interview published on Tuesday, four days before he is to defend his World Boxing Council heavyweight title.

"Many people fear that it could lead to a bloody uprising like in Syria.

"I think that violence is not a solution. But many say: we have nothing to lose," added Klitschko, who heads the Kiev-based political party Ukrainian Democratic Alliance for Reform (UDAR, meaning "punch" or "strike" in Ukrainian).

The boxer is seeking to be elected in October parliamentary polls and has been vocal in calling for more democratic freedoms from President Viktor Yanukovych.

During the former Soviet state's Orange Revolution in 2004, he supported pro-West former president Viktor Yushchenko against Yanukovych, who was later elected in 2010 and is considered pro-Russian.

When Ukraine's ex-premier Yulia Tymoshenko was jailed for abuse of power, Klitschko was prominent among protesters calling for her release.

In early January, he also called for a probe into alleged corruption in preparations for the Euro 2012 football championships that Ukraine is co-hosting with Poland in June.

Vitali is to defend his WBC title against Derek Chisora on Saturday in Munich.