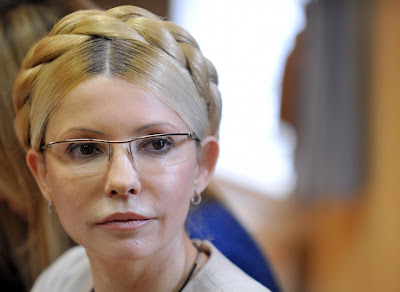 Charité confirmed the visit in a statement, though declined to say what the assessment of Tymoshenko’s health is.
Ukrainian authorities moved 51-year-old Tymoshenko to a penal colony in the Kharkiv region in eastern Ukraine on Dec. 30, a week after a court upheld her seven-year prison term for signing a gas contract with Russia in 2009.
A verdict last year that found Tymoshenko had abused her authority by signing the agreement when she was premier drew condemnation from the European Union, the U.S. as well as Russia.
If “things continue the way they are and she is not given medical care, she will need an operation,” Eugenia Tymoshenko, her daughter, said in a statement on her mother’s website.
“This operation can’t be done in the prison.”
The German doctors found that Tymoshenko, who is confined to bed and can’t sleep because of back pain, has a herniated disc, she said.
The team of doctors from Berlin, including neurologist Karl Max Einhaeupl and physician Norbert Haas, will complete a preliminary report in the next few days after coordinating with an independent visit by Canadian doctors on Dec. 15, the Charité clinic said in an e-mailed statement yesterday.
Unhindered Access
The German doctors were given “unhindered” access to Tymoshenko and performed their examination for “several hours” in the presence of a prison doctor on Feb. 14, Charité said in the statement.
They rejected unspecified “speculation” about Tymoshenko’s health in the Ukrainian media based on their assessment.
Tymoshenko is “ill, in constant pain” and requires laboratory testing, the Financial Times cited Canadian doctor Peter Kujtan as saying.
Kujtan’s team was limited in its examination because of a lack of privacy, he said, according to the newspaper.
Tymoshenko has denied the accusations against her and said President Viktor Yanukovych orchestrated the trial to sideline competitors in parliamentary elections this year.