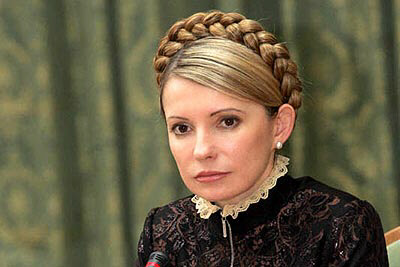 Former PM Yulia Tymoshenko
On 8 February, the Verkhovna Rada, Ukraine's parliament, has voted down a bill on decriminalising Article 365 of the Criminal Code of Ukraine – the one under which Tymoshenko was sentenced to imprisonment.

A total of 159 out of 434 MPs registered in the session hall on 8 February supported the bill on amendments to the Criminal Code of Ukraine to bring the country's criminal legislation in compliance with the United Nations Convention against Corruption.

The ex-premier was sentenced to seven years in prison under Article 365 of the Criminal Code on abuse of office charges for signing gas contracts with Russia in 2009.
A Ukrainian law decriminalising a number of articles of the Criminal Code concerning economic crimes came into force on 17 January 2012.
The law excluded criminal liability for committing certain unlawful actions, in particular, for the concealment of currency earnings.

At the same time, the parliamentary majority rejected an opposition initiative to decriminalise the article under which Tymoshenko was sentenced to seven years in jail.

And it seems that the Ukrainian government is in no hurry to weaken the pressure on the leader of the Ukrainian opposition.
The Kiev District Court of Kharkiv on 9 February began to consider the claim of the Security Service of Ukraine on the limitation of time getting acquainted with the "second case of ex-premier."

Meanwhile, Tymoshenko, despite the deterioration of her health continues to lead an active political life, influencing the situation in Ukraine and abroad.
In her letter on 7 February, Tymoshenko urged the Ukrainian opposition to unite and consolidate all the efforts in the fight against the regime of President Viktor Yanukovych.

"With all your powers and abilities, at all levels of the negotiating process at the centre and regions, you must provide a complete, genuine, sincere union of opposition forces into a single unstoppable monolith to participate in the parliamentary elections in 2012."
"This must be done no matter what the entrance barrier to the Verkhovna Rada," Tymoshenko wrote.

She said that the only key to the elimination of the current government is the unity of the opposition, "up to a single party list, a clear separation of the political field in black and white, good and evil, the Ukraine and its occupants".
"Only such an organisation fighting for election to mobilise the entire nation can win. The question today is not about which party wins the elections, but whether we can maintain an independent Ukraine for posterity," Tymoshenko wrote, calling her supporters “to really protect Ukraine from degradation!”

Meanwhile, supporters of Ukrainian opposition leader accused the authorities of obstructing the establishment of an independent survey of ex-premier.

At the same time, supporters of Tymoshenko and her European friends yet registered an application for nominating former premier of Ukraine for the Nobel Peace Prize.