Tymoshenko Complains About Yanukovych To The OSCE

February 27, 2012
BRUSSELS, Belgium -- The daughter of former prime minister and her colleagues continue to fight for the liberation of the Ukrainian opposition leader. Yevheniya Tymoshenko, the daughter of Yulia Tymoshenko, has asked the Organisation for Security and Cooperation (OSCE) to investigate the facts of abuse of the legal system of the regime of Ukrainian President Viktor Yanukovych. 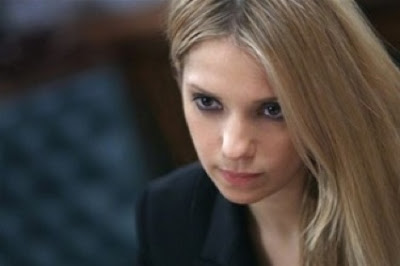 Yevheniya Tymoshenko
"The OSCE can use its investigatory powers to examine the human rights situation in my country. Under your rule of law initiative, you can examine how Ukraine's legal system is being systematically twisted to conform to President Yanukovych's will," she said at a meeting of the Committee on Democracy, Human Rights and Humanitarian Questions of the OSCE Parliamentary Assembly, according to a statement posted on Tymoshenko's Web site.

Tymoshenko's daughter also said that the international community should demonstrate solidarity with those defending democratic values in Ukraine.

"We can and will defend our freedoms, and I believe that there are practical steps to help us that you can take, not for my mother’s sake, but for the sake of all Ukrainians who look to you with hope," she said.

Meanwhile, Ukrainian Parliament's Commissioner for Human Rights Nina Karpachova spoke on Yulia Tymoshenko’s case at a special meeting of the European Parliament's committee on cooperation with Ukraine in Strasbourg.
The head of the committee Pawel Kowal (Group of the European Conservatives and Reformists, Poland) told Interfax after the meeting that the members of the committee decided to invite Karpachova in order to obtain "objective and politically unbiased information about the situation with Yulia Tymoshenko and other former members of the government who are currently under arrest."
"Today, Karpachova has informed us about her work as the Ukrainian ombudsman, spoke about her meetings with representatives of major political groups," said Elmar Brok (Group of the European People's Party, Germany), and Libor Roucek (Group of the Progressive Alliance of Socialists and Democrats in the European Parliament, the Czech Republic).
"She said that she was in regular contact with Tymoshenko, told us about her visit to the prison and much more," the MEP said.
According Kowal, Tymoshenko's case is still among the most important political issues for the European Parliament.