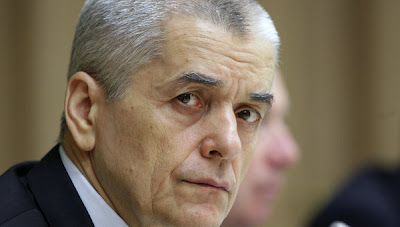 Gennady Onishchenko, the head of the Russian consumer protection agency.
The move targets a major Ukrainian industry with traditional ties to the Russian market and resembles an earlier imports ban initiated by Moscow in 2005 mostly to punish pro-Western President Viktor Yushchenko.

Ironically, this is time the imports ban comes two years after election of President Viktor Yanukovych, whose platform had been essentially based on re-building stronger relations with Russia.

The latest trade restrictions target Prometey, a Chernihiv-based dairy, as well as Hadyachsyr and Pyryatynskiy Syrzavod, both based in the Poltava region.

All cheese products made by the three companies will be “totally eliminated” from stores across Russia, Onishchenko said.
The products were already removed from shelves in Moscow, Orel, Rostov and Dagestan.

Onishchenko also indicated he may cancel an upcoming meeting with the Ukrainian agriculture minister, a signal that underscores potential for further aggrevation of the trade dispute between Russia and Ukraine.

Although the Russian officials argued that the move has nothing to do with politics, some Ukrainian politicians said the trade ban was aimed at forcing Kiev to change its foreign policy.

“The cheese war, just as the one during the year of 2005 following the Orange Revolution, is only the first strike by the Kremlin against the economy of the independent Ukraine,” Yuriy Kostenko, the leader of the opposition Ukrainian People’s Party, wrote in his blog.
“One cannot rule out attacks against other export-oriented industries, such as steel, chemicals, agriculture.”

Kostenko said the trade restrictions were aimed at putting pressure on Ukraine to try to influence on-going natural gas price negotiations and to slow down Ukraine’s European integration.

In his published instructions to be distributed among regional officials that run Putin’s campaign for election to the Russian presidency in March 2012, Govorukhin admitted that it is in Moscow’s best interests to “do everything it can to make sure Ukraine remains in a single economic, religious, cultural and historical space with Russia.”

“I don’t have a final answer to what will Yanukovych choose” between Europe and Russia, Govorukhin said.

“But what I do know for sure is that - opposite to illusions by Ukraine’s current authorities - rejection of Russia’s integration proposal for Yanukovych and his Regions Party will be the beginning of the end.”