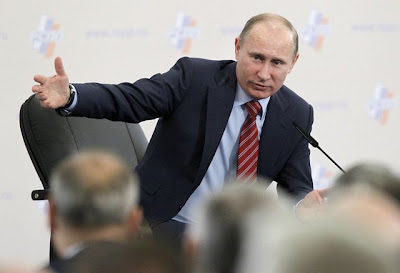 Russian Prime Minister Vladimir Putin, who is running for his former job as president, addresses a conference of the Union of Industrialists in Moscow on Thursday, Feb. 9, 2012.
The report, which included televised confessions by two suspects, is likely to boost support for Mr. Putin as he seeks his third term as president in an election Sunday.

Mr. Putin has portrayed himself as a strong protector of Russia’s national interests and has counted the victory over Chechen separatist rebels as one of the key achievements of his rule.
The report casting him as a target for terrorists could draw public sympathy and help secure his victory by a wider margin.

Mr. Putin, who was Russia’s president from 2000 to 2008 and prime minister since then, is running for a third, now six-year presidential term.
He is expected to win easily against four Kremlin-approved challengers, but an unprecedented wave of protests since December has undermined his image as a strong, popular leader.

Channel One said the suspects, acting on instructions from Chechen warlord Doku Umarov, were preparing to kill Mr. Putin in Moscow immediately after Sunday’s election.
It said the suspects were arrested in Ukraine’s Black Sea port city of Odessa after an accidental explosion Feb. 4 while they were trying to manufacture explosives at a rented apartment.

The Ukrainian Security Service said earlier this month it had detained a man sought by Russian authorities on charges of terrorism and two of his accomplices in Odessa on Feb. 4, but said nothing at the time about them being linked to an anti-Putin plot.

Its spokeswoman, Marina Ostapenko, said Monday the announcement in Moscow came only now because the Russian special service was conducting its own investigation.
She confirmed the main suspect was involved in a plot to kill Mr. Putin, but she didn’t elaborate.

There was no immediate explanation for the different number of suspects cited by Russia and Ukraine.

Channel One said the source for its information was Russia’s Federal Security Service, the main KGB successor agency dealing with domestic security.
The agency refused to comment.

Mr. Umarov, whose whereabouts are unknown, also has not responded to the allegation.

Opinion polls show that Mr. Putin likely will get a majority of the presidential vote, giving him a victory in the first round, despite mass protests that have erupted after a tainted Dec. 4 parliamentary vote.
Mr. Putin has managed to recoup some of the losses thanks to blanket daily coverage by state-controlled TV stations casting him as a defender of Russia against foreign plots.

Channel One said two of the alleged members of the group arrived in Ukraine from the United Arab Emirates via Turkey with instructions from Mr. Umarov, the top military leader for the Chechen rebels.
One of them, a Chechen, was killed during the accidental explosion in Odessa, and another one, Kazakhstan citizen Ilya Pyanzin, was wounded in the blast and arrested.

Mr. Pyanzin led the investigators to their contact in Odessa, Adam Osmayev, a Chechen who previously had lived in London and had been sought by Russia since 2007, the report said.
The TV station showed footage of Mr. Osmayev’s arrest in Odessa with black-clad special troops bursting in and a half-naked, bloodied Mr. Osmayev on his knees, his head bowed down.

Speaking to Channel One from custody in Ukraine, Mr. Osmayev described the group’s mission: “Our goal was to go to Moscow and try to kill Prime Minister Putin. … Our deadline was after the Russian presidential election.”

Both of Mr. Osmayev’s hands were bandaged, and his face was covered in green dots from an antiseptic used to treat his cuts.

He said he wouldn’t have become a suicide bomber, but the other Chechen who was killed in the accidental explosion might have agreed.
Mr. Osmayev added they considered using powerful military mines that would have made a suicide mission unnecessary.

Mr. Umarov, the Chechen rebel leader, has claimed responsibility for a number of attacks against Russia.

He claimed responsibility for a January 2011 suicide bombing at Moscow’s Domodedovo Airport that killed 37 people and injured more than 180.
He also had warned that many more such attacks would follow if Russia did not allow the Caucasus to become an independent Islamic state governed by Sharia law.

He is seen more as an ideological than a military figure, as many militant cells operate autonomously and shun centralized command.

In response to Russia’s opposition protests, Mr. Umarov issued a statement this month ordering his men to avoid hitting civilian targets, saying that civilians should be spared because they have risen up against Mr. Putin.

Channel One said Mr. Osmayev had led the investigators to a cache of explosives near a Moscow avenue that Mr. Putin uses to travel between his office and a suburban residence.
A Russian security officer told the television station that the suspects also had videos of Mr. Putin‘s convoy taken from different angles to prepare for the attack.

Mr. Pyanzin, who also confessed on film, was shown saying the group was to sabotage economic facilities and then try to kill Mr. Putin.