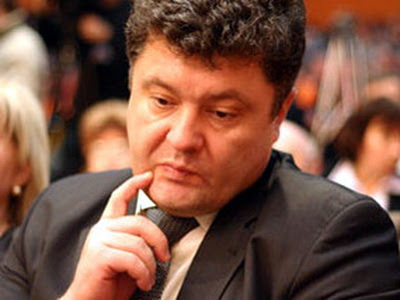 Petro Poroshenko
The nomination, made by Prime Minister Mykola Azarov, needs to be approved by the president, and Yanukovych, following a brief meeting with Poroshenko, said he was “generally happy” with the nominee’s vision for reforming the economy.

“I told him: Petro Oleksiyovych, please prepare and submit a very brief program of what you want to implement at the ministry,” Yanukovych said in an interview with Pershiy television, the presidential press service reported.

The fact that the nomination was disclosed before the official appointment is extremely unusual for Yanukovych, let alone that the opposition figure had been tapped for the post.

The disclosed nomination may be an attempt to force Poroshenko to accept the job, which bears serious political risks for him ahead of the upcoming parliamentary elections in October.

Poroshenko, the owner of the Channel 5 television among other assets, has been positioning himself as an ally of Arseniy Yatseniuk, the leader of the opposition Front For Changes party.

Oleksandr Yanukovych, the son of the president who amassed a fortune since his father had become the president two years ago, was recently reported to be interested in acquiring a stake in the Channel 5.

There were contradictory reports on Thursday to whether Poroshenko had accepted the new job.

Oleksandr Yefremov, the leader of the ruling Regions Party group in Parliament, said Poroshenko was officially appointed the economy minister.

He also said that Yuriy Kolobov, a close ally of Serhiy Arbuzov, the governor of the National Bank of Ukraine, was appointed the finance minister.
Kolobov, just like Arbuzov and other recently appointed officials, is thought to be a close ally of Oleksandr Yanukovych.

None of these appointments had been officially posted on the presidential website as of late Thursday.

Poroshenko was not available for comments on Thursday.

“You can call this the dilemma of Poroshenko,” Volodymyr Fesenko, the head of the Penta political analysis firm, wrote on his blog.
“He wants to be in the government, but he clearly sees the risks. The tasks that the government is now facing are super difficult and super important. Are the risks worth it?”

The developments come amid sweeping reshuffle in the government over the past several weeks, underscoring Yanukovych’s unhappiness with the government’s economic course.

Yanukovych replaced Fedir Yaroshenko with Khoroshkovskiy as the finance minister in the middle of January.
Khoroshkovskiy before his January appointment was the chief of the SBU security service.

First Deputy Prime Minister Andriy Kliuyev on February 14 was appointed the secretary of the National Security and Defense Council, the top security body under the President.

Raisa Bohatyriova, who led the NSDC for the past five years, was appointed as deputy prime minister and the healthcare minister, the presidential press service reported.