February 27, 2012
ODESSA, Ukraine -- Even though major St. Valentine's legends spawned in Eastern Europe, Cupid's play day is just now hitting its stride as a lover's feast in such places as Russia and Ukraine. 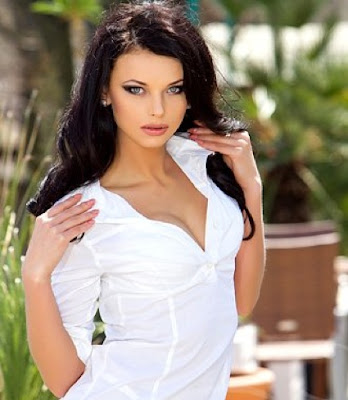 Zina, winner of Miss Valentine 2012.
In fact, ground zero for Valentine's Day festivities in this part of the world is the mysterious and sensuous Black Sea resort of Odessa, Ukraine, where on Valentine's weekend international online dating leader AnastasiaDate invited 23 beauties from across the country to compete for the title Anastasia's Miss Valentine 2012.
Held at exclusive Club Palladium in Odessa's center, the beauty pageant featured 3 stunning rounds...swimsuit, evening gown and Q&A...as part of a Romance Tour Social hosted by AnastasiaDate.
Present were dozens of select gentlemen members of Anastasia who experienced a unique dating encounter in the elite company of not only the exquisite contestants, but over 300 single female guests, also members of Anastasia.
All this was folded into what became Odessa's entertainment event of the year amid actors, musicians and singers who performed scenes from popular Ukrainian plays before the heaving international crowd.
A sub-zero Arctic freeze notwithstanding, the panel of judges, like kids in candyland, finally chose 21-year-old raven-haired goddess Zina of Odessa as Anastasia's Miss Valentine 2012.
While Zina's hot curves and sweet elegance won her top prize, other of Odessa's finest swept the field with breathtaking runners-up, blue-eyed wonder Viktoria and blonde perfection Irina.

This is Anastasia's 3rd St. Valentine pageant on the Black Sea shores, with each event becoming more popular and outstanding, each gathering more audience and media attention.
Source: Marketwire

Unknown said…
None of the ones above allow adult content. Especially the ones you claimed that were personally reviewed by you.