February 14, 2012
KIEV, Ukraine -- On the second anniversary of Viktor Yanukovych’s election as Ukraine’s fourth president, threats of visa black lists, sanctions and international sanctions by the European Union and the US are growing. 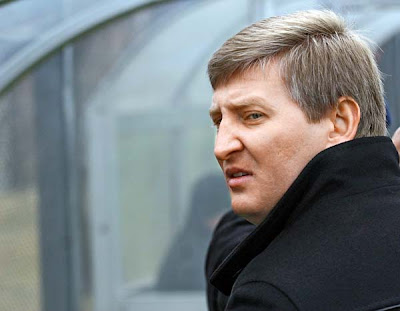 Rinat Akhmetov
Without a halt to its undemocratic policies, Ukraine will rank alongside Belarus as an international pariah by the end of this year.

Interestingly, Akhmetov, who has been associated with Yanukovych since he was the Donetsk Governor in 1997-2002, was not on the list or had not been included in Segodnya’s published version.
Most of those listed belong to the so-called “gas lobby”.

A leaked report claimed that Ukrainian President Viktor Yanukovych is already blacklisted and that EU leaders are discussing the possibility of sanctions.
The Head of the European Union Commission in Kiev, Jose Manuel Pintu Teishera, has confirmed that EU leaders and members are blackballing Yanukovych.

Parliamentary Chairman, Volodymyr Lytvyn, said that the issue of possible sanctions against Ukraine is more likely in the aftermath of the Parliamentary Assembly of the Council of Europe (PACE) January 26 resolution.
He called for parliament to implement PACE’s recommendations, but to do that would undermine the Yanukovych regime.

The PACE resolution called for the release of political prisoners in Ukraine, including former prime minister and opposition leader Yulia Tymoshenko.
PACE threatened, “the possible consideration of sanctions if the assembly’s demands are not met”.

Lytvyn warned against Ukraine becoming internationally isolated.
However, the trend toward isolation is increasingly visible.
Segodnya claimed that the EU and US were discussing the visa blacklist and that the US Secretary of State, Hillary Clinton, had warned Yanukovych about the possible legalization of such a list during the Davos World Economic Forum.

Ukrayinska Pravda investigative reporter Serhiy Leshchenko pointed out that, “Leonid Kuchma took only eight years to become an unwanted guest in Europe, while Yanukovych managed this in only two.”
Leshchenko witnessed how Yanukovych can now only attend international conferences and summits as he is no longer given official invitations by European or North American governments.
Yanukovych recently attended the Davos World Economic Summit and Munich Security Conference, but on both occasions European and American leaders ignored him.

Four factors will make Ukraine’s international isolation increasingly likely by the end of this year:

1. The impossibility of fulfilling the demands in the PACE resolution regarding the release of political prisoners.
If Tymoshenko were to be released, the Party of Regions would heavily lose the October parliamentary elections and Yanukovych could forget seeking to win a second term in January 2015.
If Yanukovych lost the 2015 elections, criminal charges would be inevitably drawn up against him and his entourage.
Tymoshenko is unlike Viktor Yushchenko, who failed to fulfill his 2004 election pledges to put “bandits in jail.”

2. The authorities’ policies have driven them into a dead end.
The opposition have refused to join the Constitutional Assembly to draft a new constitution until the authorities fulfill the demands laid out in the PACE resolution, including freeing political prisoners.
Yanukovych’s speech to parliament on this question was drowned out by calls of “Yulia – freedom!”.

Yanukovych has already changed the constitution in September 2010, in an unconstitutional manner by stuffing the Constitutional Court with judges who would vote to annul constitutional changes adopted in December 2004 that transformed Ukraine into a parliamentary republic.
Following the vote, Ukraine returned to the 1996 presidential constitution.
Without opposition support the changes adopted by the Constitutional Assembly will be viewed as illegitimate, both domestically and internationally.
Constitutional changes will also be difficult to engineer as they require 300 or more votes (out of 450), which Yanukovych is unlikely to possess after this year’s parliamentary elections.
He most certainly would not have 300 or more deputies if he fulfills the PACE resolution and releases Tymoshenko, since the Party of Regions would lose the elections.

3. EU leaders have a deep crisis of confidence in Yanukovych who has lied to them.
Yanukovych promised to Swedish Foreign Minister, Carl Bildt, and MEP Elmar Brok that he would support parliament’s reform of the criminal code by removing Soviet era articles used to prosecute Tymoshenko.
Polish Foreign Minister, Radek Sikorski, revealed that there is growing distrust in Europe toward Ukrainian leaders because of the Tymoshenko case.
Former Deputy Foreign Minister, Valeriy Chaly, described the “crisis of trust” between the Ukrainian leadership and the EU and US as resulting from Yanukovych failing to fulfill his promise to decriminalize articles in the criminal code and release Tymoshenko.

A second vote on February 8 to decriminalize these articles failed after Party of Regions deputies did not support the vote: 159 opposition deputies voted for the reforms.
The first attempt to reform these articles in the criminal code failed in November 2011, when the Party of Regions also refused to support decriminalization.
Party of Regions faction leader, Oleksandr Yefremov, said that his faction would not change its stance on this question “because it is logical”.
Yefremov said that they would not need to fulfill PACE recommendations as Soviet era articles in the criminal code are similar to articles in some European states.
This is not the view of the EU or US.

4. International organizations such as PACE and the OSCE as well as European and US governments cannot recognize this year’s elections as having been held in accordance with democratic standards, while opposition leaders remain in jail.
Thus, Ukraine would automatically resemble more authoritarian Belarus, where there are also political prisoners in jail.
Former Interior Minister, Yuriy Lutsenko, is also about to be sentenced on trumped up flimsy charges.

Chaly sees Ukraine moving toward “gradual isolation” and believes “unfortunately these processes are taking place quite quickly.”
He remained pessimistic about a shift in policy “because he does not see a desire to change the situation on the part of this regime”.