As Europe Shivers, Russia And Ukraine Point Fingers Over Natural Gas Supply To The West

February 04, 2012
MOSCOW, Russia -- The flow of natural gas has fallen off sharply in the main pipelines supplying Europe from Russia, but this time cold weather — not politics — is to blame. 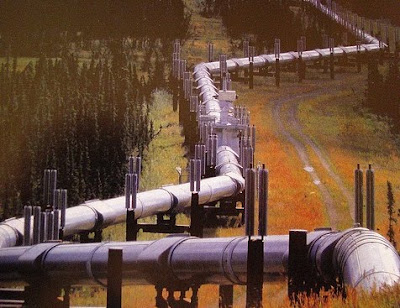 Ukrainian pipeline that carries gas to Western Europe.
The dwindling supply is sending a chill through an already very chilly European Union, though it has not yet led to heating shutdowns: countries have tapped reserves or alternative supplies instead.

The shortfalls seemed most extreme in Italy, at the western end of the Russian-supplied pipelines after they pass through a half-dozen or so other cold countries: Italian officials said shipments were falling short by as much as 30 percent.
Energy officials in Germany, Austria, Slovakia and Poland also reported shortfalls.

Though the shortage was reminiscent of past disruptions in Europe’s fuel supply from the former Soviet Union caused by rancor between Ukraine and Russia, a spokeswoman for the European Union said Russia was consuming more gas at home because of a cold spell.

With the gas pressures tapering off, European Union officials on Friday activated an emergency plan for re-allocating heating fuel among countries.
For now, no country has been compelled to turn off the heat or curtail electricity use.

In cold periods, the former Soviet pipeline system that provides about a quarter of Western Europe’s natural gas routinely reaches its maximum capacity, and consuming nations are encouraged to dip into reserves to meet higher demand.

Still, the squabbling over fuel on cold winter days has tended to bring out an ill temper in European officials that belies the ostensibly well-regulated, highly detailed contracts that are supposed to determine who will stay warm, and at what price, in the dead of winter.

Energy ministers and executives at the national energy companies in Russia and Ukraine blamed each other’s country for the shortfalls in Western Europe.
Each accused the other of drawing heavily and inappropriately on the shared pipeline system, leaving insufficient supplies for those farther west.

“The main problem is that it has gotten much colder in Russia,” Ukraine’s minister of coal and industry, Yury Boiko, said in comments carried by the Interfax news agency.
He said Russia was consuming more gas at home, to heat homes and generate electricity.

He said that supplies at the border had fallen to 415 million cubic meters per day from 490 million.

The director of the export arm of the Russian company Gazprom, Aleksandr I. Medvedev, told Russian news agencies that Ukraine was to blame.
Ukraine, he said, is “sitting on the transit pipes” and taking out “significantly more than contract volumes.”

Another Gazprom executive, Sergei Komlev, the head of the contracting department, told participants at an economic forum in Moscow that Western European energy companies had inappropriately elevated their daily demands, knowing they could not be met, thus exaggerating the extent of the shortfall from Gazprom.

“They are asking for more than we are obligated to deliver,” he said.
“There is a difference between wishes and agreed contract quantities.”

About 80 percent of natural gas exports to Europe go through Ukraine in pipelines used both for transit and to meet internal demand in that former Soviet republic.
From there, the pipelines snake westward.

The Italian national gas company, Snam Rete, reported deliveries fell 29 percent below what it had requested from Gazprom on Friday.
Russian gas deliveries to Italy petered out through the week, beginning Tuesday with a 7 percent shortfall.

On Friday, the European Union activated an emergency council of energy officials who coordinate shipments between countries to alleviate a drop in supplies from outside the bloc.
Europe relies on Russia for about a quarter of its natural gas consumption.

The transit of Russian natural gas across former Soviet states to customers in Western Europe is a pivotal economic and security concern for the Continent.
Countries are less vulnerable today than during politically tinged shutoffs in 2006 and 2009 because they have built additional storage capacity and interconnecting pipelines to shunt fuel between states.

The shortfall in Italy this week, though significant, has not yet affected homes or factories.
Italy also receives gas via pipeline from Algeria, Libya and Norway and shipments of liquefied natural gas from ports.