October 27, 2011
KIEV, Ukraine -- In his new book, Ukrainian President Viktor Yanukovych shares his dreams about the future of his country. But are they his? 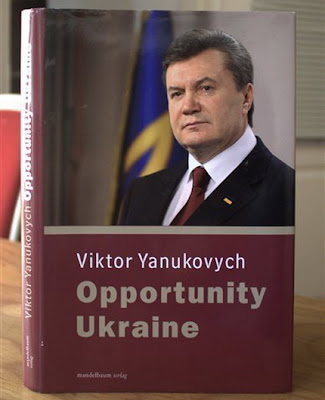 Opponents accuse Yanukovych of plagiarism, and an influential writers' union in Austria, where the book was published, refused to support its presentation at the Frankfurt Book Fair this month.

Yanukovych's office first denied the accusations of plagiarism, calling them a "provocation" against the president sponsored by his critics.

But then the translator of the book into English took the blame upon himself, saying he had inadvertently deleted most of the footnotes from the book and apologized to the president.

The book scandal is a further embarrassment to the often crude and ill-mannered Yanukovych, who is famous for gaffes and blunders such as making spelling mistakes, confusing genocide with genetic pool, and mixing up the Balkan states of Kosovo and Montenegro.

It also undermines his efforts to portray himself as a Western-minded leader as he seeks European Union membership for Ukraine.

"A book by a president is the height of his career, his life's path," said Serhiy Leshchenko, a reporter with the online newspaper Ukrayinska Pravda, who broke the story.

"This could have been Yanukovych's literary embodiment, but it turned out to be banal plagiarism. They grabbed pieces from various sources."

The scandal also comes at a time when the United States and the EU are condemning authorities in Ukraine for the prosecution and imprisonment of a longtime Yanukovych foe — former Prime Minister Yulia Tymoshenko.

Leshchenko said he became suspicious when the book compared reforms in Ukraine not to those in other ex-Communist East European nations, but to reforms in a country as distant and unlike Ukraine as Singapore.

After some research, Leshchenko traced those descriptions to a March article by the Ukrainian weekly magazine Korrespondent.

The Korrespondent story and the passage on reforms on Singapore in Yanukovych's book are indeed nearly word-for-word the same.

"Whatever excuses the presidential administration is making, the fact of plagiarism is obvious," Vitaly Sych, the magazine's chief editor, wrote in his blog.

Furthermore, a page-and-a-half-long discussion of party affiliations in Ukrainian politics is uncomfortably similar to a political science college paper posted on the Russian essay-sharing website Referat.ru in 2007.

A reflection on land reform appears to borrow from a speech by Communist Party leader Petro Symonenko.

Recollections of the Orange Revolution rely on a 2004 piece in a weekly called 2000.

A discussion of separatism mimics a passage in an article published by Vasily Volga, a former senior financial official, now under arrest.

Seeking support in writing a book is common practice in the West, where many politicians rely on collaborators to help with the research or assist in much or all of the writing.

But Leshchenko suspects that Yanukovych simply hired a team of poorly skilled writers who copied and pasted much of the book from various sources without giving attribution.

Austria's Mandelbaum Verlag printed 50,000 copies of "Opportunity Ukraine" in the run-up to the 20th anniversary of Ukraine's independence on Aug. 24.

The English-language book appears to have been aimed at attracting foreign investment.

Mandelbaum Verlag publisher Michael Baiculescu declined to comment on the allegations to The Associated Press.

But he told the German weekly Die Zeit that there were indeed problems with the book.

"The translator told us that some parts, while not plagiarism, are not always properly sourced, since the footnotes are left out," Baiculescu was quoted as saying.

The Syndicate of Austrian Authors condemned the book because of those accusations and because the publisher refused to provide full information on the book and how it was published.

The 3,500-member group also refused to support the book because that would be tacit backing of Yanukovych's undemocratic policies, it said in a statement.

Yanukovych's office declined to discuss the matter with the AP, but previous comments on the book have been contradictory.

Yanukovych adviser Hanna Herman dismissed the allegations of plagiarism as a "shameless" and immoral campaign to discredit the president.

She also told the UNIAN news agency that Yanukovych did not copy anyone else's statements, but that it was the other way around; others must have used thoughts from his earlier books.

Yanukovych has authored some five books and publications, which include his interviews, speeches and reflections on Ukraine's reforms and its future, according to his office.

"I can only congratulate the president on this book," Herman was quoted as saying.

But then the translator of the book, Kostyantyn Vasylkevych, acknowledged that he deleted most of the footnotes, including the one for the Korrespondent article, in an attempt to make the book more readable.

In an article on a government-linked news website, Vasylkevych issued his "deepest" apologies to Yanukovych and those journalists who were "disoriented by this mistake," but he lamented that it was being used in a "continuing, cynical anti-presidential campaign."

Vasylkevych, however, disputed most of the other similarities between the book and other publications, saying Yanukovych was simply stating information that was common knowledge.

But many Ukrainians remained unconvinced.

"European politicians have lost their posts over such actions," said Valeriy Chalyi, a senior analyst with the Razumkov Center in Kiev.

He referred to Germany's defense minister, Karl-Theodor zu Guttenberg, who was forced to resign in March after it emerged that he copied large parts of his doctoral thesis without attribution.

"This is clear plagiarism ... and of course this isn't European style."