May 26, 2011
KIEV, Ukraine -- President Viktor Yanukovych on Wednesday reiterated plans of signing a free trade agreement with the European Union this year, a choice that may eventually complicate relations with Russia. 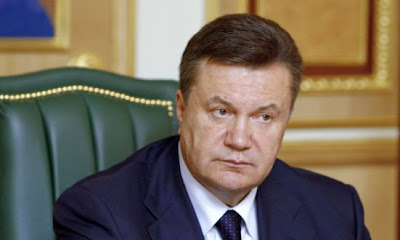 It also warned Ukraine that joining the EU free trade agreement would force Russia to slap prohibitive trade barriers against Ukrainian goods, a warning that may lead to a trade war.

“Our main priority is integration into the EU,” Yanukovych told Bloomberg. “We are ready to sign the association agreement this year. We want the prospects of Ukraine entering the EU to be included in this accord so that the accord would not be empty.”

The country of 46 million is the main transit route for Russian fuel to EU countries, including Germany, Austria and Poland.

Yanukovych, 60, wants to cut the price it pays for Russian gas by almost 20% to $240 per 1,000 cubic meters, he said in an interview in his office in Kiev yesterday.

Russia is trying to use fuel prices as a lure to pull Ukraine into a customs union with Belarus and Kazakhstan even as the former Soviet republic looks to deepen economic and political ties with the EU.

Ukraine depends on Russia for more than 50% of its natural-gas supply, which its eastern neighbor shut off for two weeks in 2009.

Ukraine sought to reset relations with Russia after Yanukovych was elected last year.

His predecessor, Viktor Yushchenko, angered the Kremlin by backing Georgia during its five-day war with Russia in 2008 and pushing for Ukraine’s membership in the NATO.

Yanukovych pledged to improve relations by cooperating with gas producer OAO Gazprom and ruled out membership in the North Atlantic Treaty Organization.

He kept the door open to the EU by taking his first trip as president to Brussels before visiting Moscow.

Ukraine’s association agreement with the EU may be concluded this year, European Commission President Jose Barroso said in Kiev on April 18, adding that the two sides have made progress on agreeing to visa-free travel.

Entering the customs union with Russia, Kazakhstan and Belarus would end the chances for the agreement, he added.

“Russia was, is and will be our strategic partner,” Yanukovych said.

“We are now searching for mechanisms of cooperation. We do think we can reach an agreement that will allow us to work with the customs union to the extent which Ukrainian laws and our obligations to world organizations such as the World Trade Organization allow.”