May 01, 2011
LOS ALAMITOS, USA -- To watch twins Jonathan and Anastasia Rosenthal play handball in their backyard, they look and sound like any 9-year-old American children. 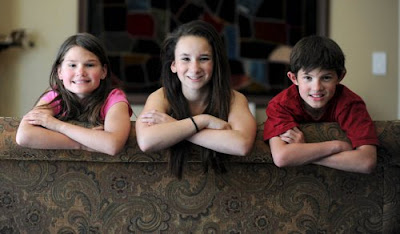 From left to right, Anastasia Rosenthal,9, Hannah Rosenthal,12, and Jonathan Rosenthal,9, of Los Alamitos. Twins Jonathan and Anastasia were orphans adopted a little more than two years ago, out of poverty in the Ukraine. Anastasia and her sister Hannah will be acting in an upcoming production of the musical "Annie" in May.
They argue over a game of "rock, paper, scissors," dispute points in their games. At odd points they run off for the odd adventures that pop into a 9-year-old brain, then return.

So it's surprising to realize that that a little more than two years ago, they faced lives of privation as orphans in rural Ukraine.

"I thought we'd always live there," Anastasia says of the orphanages where the twins spent their first seven years.

Today, they live in a sprawling house in an upscale Los Alamitos neighborhood and attend well-regarded Weaver Elementary School. They are working to catch up with other third-graders in reading, but otherwise are their contemporaries. They have lost their European accents and most of their native language.

In May, the real-life orphan Anastasia will play one when she performs with her older adoptive sister Hannah, who will be the lead, in a production of "Annie," presented by a regional musical theater group.

The first of 10 performances at Millikan High School will be on May 6.

Anastasia, who initially wasn't interested in acting in the play, said she changed her mind "because it reminds me of my past. I get to play an orphan again."

However, in the next sentence, Anastasia says the role she is really wants is "Chip" in an upcoming production of "Beauty and the Beast."

"And a broomstick," she adds.

Jonathan isn't mirroring his sisters' interest in theater, saying it's "for girls."

"She said, `I came from an orphanage you know, I have to do it,"' Rose recalls. "She might have been trying to sell us, because she can definitely do it, but I think this really struck a nerve."

Hannah, 12, a seventh-grader at Oak Middle School, had acted in a previous version of "Annie" as an ensemble orphan before meeting her new sister.

This time it means more.

"It just makes it more real for me," said Hannah, who will play the spunky orphan Annie in the popular musical. "I guess it brings more depth. Before I didn't fully grasp it. I just thought, oh, they're orphans they live a hard-knock life. Now, I know what it's really like."

Indeed, the back story of Anastasia and Jonathan, or Nastia and Ivan as they were known in the Ukraine, is like something out of a Robert Ludlum novel.

The Rosenthals feel they were led to the Ukraine to adopt the twins.

Dad Michael and Rose almost didn't make the trip when their plan to adopt another child fell through.

Michael says it was Hannah who urged them to make the trip and trust in God.

The Rosenthals soon discovered the twins and the connection was instant.

According to the World Orphan Project, Ukraine has more than 100,000 orphans. At 15 or 16 years old, most graduate to uncertain lives, with girls often turning to prostitution or becoming victims of human trafficking and boys to lives of crime.

The country has seen an uptick in HIV/AIDS infections, particularly in the 15- to 24-year-old age category.

When the Rosenthals were going through the adoption process, the courts told them the children had been abandoned at birth. However, the children remember a couple of visits from their mother and father. Where the truth lies is anyone's guess.

Although the twins were apparently well-treated in the orphanage and the Rosenthals didn't see abuse, the kids still went without. Both had vision problems that went untreated and hindered their education.

The adoption process went smoothly until a supposed aunt showed up at the 11th hour apparently intent on ruining the adoption or shaking down the family for money.

The Rosenthals hastily scooped the children from the orphanage and were driven overnight via back roads to Kiev and the U.S. Embassy. They had been warned train stations and airports might be monitored.

Eventually the adoption was formalized and the family arrived in the U.S. and began truly bonding.

Three of the four females in the Rosenthal family will be in "Annie."

Mom, Rose, has recently started showing her acting chops and will play Mrs. Roosevelt. Oldest daughter, Abbie, 14, is in a high school play.

Luckily for Jonathan and Anastasia, "It's the Hard- Knock Life" can now just be a song in a musical and nothing more.