May 14, 2011
KIEV, Ukraine -- The subtropical climate together with geographic location, health-resort potential and incentives from the local government will make Crimea the tourism capital of Eastern Europe. 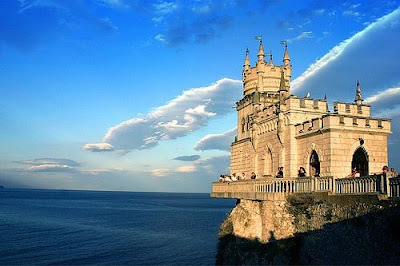 Swallow's Nest Castle in Crimea.
Such ambitious plans have been voiced by the Crimean Prime Minister Vasyl Dzharty during his official two-day visit to London and Brussels, reports the general directorate of information policy of the Council of Ministers of the autonomous republic of Crimea.

During his visit to the EU the Crimean Prime Minister met with the Commissioner for Enlargement and European Neighbourhood policy Stefan Fuele and signed the agreement on financing the "Support of the joint initiative of cooperation in Crimea" program.

According to the agreement the EU pledged EUR 12 million to promote economic and social development in Crimea and to facilitate further fundraising for the area starting this year, reports the directorate.

This agreement became the culminating point of the visit of the Crimean Prime Minister Vasyl Dzharty to London and Brussels where he opened the "Investment Opportunities in Crimea" Ukrainian business forums.

The true potential of Crimean geographic location, climate and historical background can hardly be overestimated.

Crimean summer is similar to that of French and Portuguese Mediterranean coasts and the peninsular shares the same latitude with Venice.

The peninsular doesn't experience the high humidity characteristic for Greece and Turkey in the summer because of its near-island position in the Black Sea.

Crimea is the place that unites the past and the present of the multinational Ukraine.

During the times of the Russian monarchy and under the Soviet Union, Crimea served as a summer retreat and "spa" area for the Russian tsar and later for the Communist Party leaders.

Multiple vineyards as well as the Wine Tasting Hall in the city of Yalta, the "Pearl of the Crimea," offer good quality wine.

The local Vorontsov Palace and the British Buckingham Palace have been designed by the same architect - Edward Blore. Livadia palace hosted 1945 Yalta conference between Roosevelt, Churchill and Stalin.