May 18, 2011
KIEV, Ukraine -- Ukraine has the highest HIV infection rate in Europe and now there are fears its epidemic could spread to neighboring countries. Special correspondent Kira Kay reports from Ukraine on the health issue. 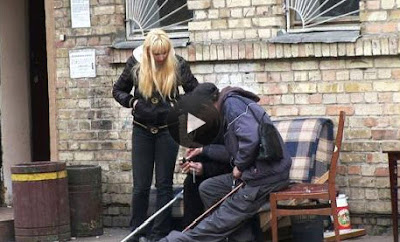 KIRA KAY: In a clinic tucked away in a southern neighborhood of Kiev, Vadim completes what has been his daily habit for three years. He's called into the doctor's office and given a dose of methadone.

After a check to make sure Vadim has swallowed it all, he's dismissed. Vadim says this program has saved his life, not just by keeping him off illegal drugs, but by keeping him from contracting HIV/AIDS.

The logic of this substitution therapy is simple, the more drug users on methadone, the less sharing of needles and thus fewer transmissions of HIV.

KOSTIANTYN PERTSOVSKYI, International HIV/AIDS Alliance in Ukraine: It is not just about getting a pill once a day, but here people get consultations from social workers. It really changed their behavior to less risky one, not only to themselves, but to the community as a whole.

KIRA KAY: Ukraine has the highest HIV/AIDS rate in all of Europe. Half-a-million people may be infected, more than France, Germany and the United Kingdom combined.

Diagnoses here have doubled in the last decade, as the epidemic exploded among Ukraine's large injecting drug user population and their sexual partners. Today, almost half new HIV infections are through heterosexual contact and the epidemic is at the cusp of spreading into the wider public.

ANDRIY KLEPIKOV, International HIV/AIDS Alliance in Ukraine: If nothing will be changed, nothing will be done in the next three, five years, epidemic, for sure, will get generalized.

KIRA KAY: Andriy Klepikov is the executive director of the International HIV/AIDS Alliance in Ukraine.

ANDRIY KLEPIKOV: That will be a disaster, not only for Ukraine, but also for -- for entire Europe, I think. So, that is why it is very important to apply more efforts now.

KIRA KAY: And so, prevention groups are rushing to reach high-risk populations in time, like in the southern city of Odessa, with its massive international port, stream of tourists, and vibrant commercial sex trade.

It was here in Odessa that the first case of HIV in Ukraine was diagnosed in 1987. Doctors suspect it was brought in by a foreign exchange student. Today, Odessa has some of the highest HIV rates in the country. 17 percent of Odessa's sex workers are HIV-positive and are another conduit of the disease into the general population.

So, by day this mobile clinic scours the highways around Odessa, reaching sex workers with condoms, clean needles and information. By night the van is parked in the middle of the city's red light district.

KOSTIANTYN PERTSOVSKYI: The mobile ambulance is doing, voluntarily, counseling and testing, rapid testing for HIV/AIDS, which takes about 20 minutes. And those girls whose results show positive for HIV, they are referred to a clinic. They get proper treatment. And even those who get negative results, they are better informed about the way HIV/AIDS epidemic is spread.

KIRA KAY: There has been progress here in Ukraine, including a 75 percent reduction in mother-to-child transmission in just six years. HIV treatment is free through the national health care system.

And pushed by activists who wanted a bigger national commitment to prevention efforts, the parliament enshrined substitution therapy as part of a sweeping new HIV/AIDS law passed in January. But within days of the law's adoption, the Ukrainian Ministry of Internal Affairs Drug Enforcement Department started collecting data on substitution therapy patients.

ANDRIY KLEPIKOV: Ministry of Interior issued an instruction, which went out to all regions of Ukraine, with demands to collect all information, which included personal data, the history of injecting drug use, what kind of substitution therapy drugs they are getting, in what dosage, which is medical information. It's also private. It's confidential.

ANATOLY MOGILEV, Ukrainian minister of internal affairs (through translator): We requested such information, not to make it public. We just need it, because such people belong to risk groups that we need to know about.

ANDRIY KLEPIKOV: Unfortunately, we don't know how this information will be used in the future. So, now it is kept by the Ministry of Interior. And still remembering the Soviet past, where law enforcement, when they collected information, it will be kept forever, and sometimes it can be used against you.

KOSTYANTYN GRYSHCHENKO, Ukrainian foreign minister: There is a challenge, problem of law enforcement. And there is a problem of how to - best develop the approach according to our particular situation. Everyone understands it. Nobody is an evil kind of figure, be it police or doctors. I believe that we will find an answer pretty soon.

KIRA KAY: There are also concerns for Ukrainians who have already contracted HIV and are in need of treatment -- 22,000 people are on antiretroviral, ARV, medication, but the need is three times that.

And, at the end of last year, supplies of certain ARVs started to run out in parts of the country.

Volodymyr Kurpita is the executive director of the all-Ukrainian Network of People Living With HIV, a watchdog group.

VOLODYMYR KURPITA, Network of People Living With HIV: In late Dec. 2010, we received call from -- many, many calls from our regional representatives, highlighting the issue of shortcoming ARV in the regions, which led to switching the patient from one drugs to another drugs without any explanation, or switching children from pediatric formulation to adult formulation.

WOMAN (through translator): He was on one ARV until the end of 2010, and everything was OK. Then, in our country, the problems with the therapy began, and they changed his medication.

KIRA KAY: This Odessa mother says her 10-year-old son suffered a severe allergic reaction to his new medication that forced him into emergency care. A third medication was eventually found for him.

But doctors worry that such changes could create resistance or other long-term problems.

WOMAN (through translator): Everything's been OK for almost two months, knock on wood. But all this took a lot of effort, because the doctors kept telling us, we don't have anything to give him. I feel that we are simply left on our own to survive in this country.

KIRA KAY: The shortages have been blamed on the Ministry of Health's failure to accurately forecast demand and make purchases in time. And Kurpita's Network says the government also pays up to three times more for medications than necessary.

DR. NATALIA NIZOVA, National AIDS Center: Yes, in some case, we have situation when price for some of ART higher than in other countries.

DR. NATALIA NIZOVA: All ART drugs, it's from another countries, from foreign countries. And, as a result, Ukraine need have some distributors who work with pharmaceutical company.

KIRA KAY: I understand the middleman is a problem here, that they take a percentage of the money.

KIRA KAY: Dr. Nizova says that the Health Ministry will not let another stock-out happen. But the Network is actively tracking supplies and fears some ARVs could run low again by autumn.

International donors, like the United States and the Global Fund, are increasing their assistance, but remain concerned about the government's ability to address problems like corruption and its crackdown on substitution therapy.

In 2004, the Global Fund cut off its direct government funding, and since then has only been supporting aid groups.

ANI SHAKARISHVILI, United Nations Program on HIV/AIDS: Indeed, the suspension of the grant was related to some of those very critical issues related to procurement and supply management.

KIRA KAY: Ani Shakarishvili is the Ukraine country coordinator for the United Nations Program on HIV/AIDS, a partner of the Global Fund. She says an audit of government practices is currently under way.

ANI SHAKARISHVILI: There are certain conditionalities, and rightly so. The government, and the country itself, has to be committed in order for the Global Fund to provide additional funding. The governmental commitment into the AIDS fight is crucial now. It should be the government owning, leading and taking on, because the international aid is not unlimited.

KIRA KAY: The question is whether the Ukrainian government can surmount the political and structural hurdles it faces in time to take control of the spreading epidemic.