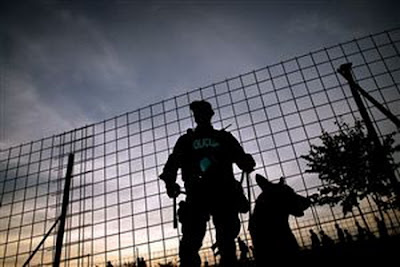 EU police guarding border.
The Ukrainian government has rejected an assessment published by Europol, the EU's police co-operation agency, which suggested that any future lifting of visa restrictions for Ukrainians would open up new routes into the EU for organised crime.

Kostiantyn Yelisieiev, Ukraine's ambassador to the EU, said that the statement - made in Europol's annual threat-assessment on organised crime - was “not acceptable”.

“The action plan on visa liberalisation that was presented to Ukraine during the last EU-Ukraine summit [last November] proves that Ukraine has reached a significant progress in justice, liberty and security, in particular in the fight against organised crime,” Yelisieiev.

He said that the Europol statement was “not consistent” and “might prejudge” assessments to be undertaken by the European Commission as part of its visa liberalisation dialogue with Ukraine.

Europol said that criminal groups from the former Soviet Union, Turkey, Albania and Kosovo were seeking to “expand their interests in the EU” and “may exploit opportunities in the possible accession of Bulgaria and Romania to the Schengen zone, and recent and prospective EU visa exemptions for western Balkan states, Ukraine and Moldova”.

France and Germany have blocked the accession of Bulgaria and Romania to the EU's Schengen area of borderless travel - originally scheduled for this spring - over concerns that the two countries do not fully control their borders.

The Commission is also concerned at an increase in fraudulent asylum claims following the lifting of visa restrictions on Serbia and Macedonia in December 2009, although the numbers have now receded.

The EU has been reluctant to offer even the prospect of lifting visa requirements for citizens of Ukraine, a country of more than 46 million people.

The ongoing visa dialogue is an open-ended process with no firm timeline.

In its report, Europol also found that tougher immigration controls at the EU's external borders have forced irregular migrants to seek the help of people-smugglers.

The report suggests that tougher controls that have reduced illegal immigration along some borders may lead to increases in other areas.

Europol also warned that organised gangs have been exploiting the upheaval in north Africa and have facilitated the passage of many of the 25,000 Tunisians who have entered Italy since the beginning of this year.

The Commission yesterday proposed changes to the Schengen-area rules, and to migration policy in general, in response to the spike in migration from the Arab world.

Member states' interior ministers will discuss the matter at an emergency meeting on 12 May.