May 19, 2011
BUCHAREST, Romania -- Ukraine is seeking consultations with Bucharest and Washington on the proposed deployment of U.S. missile interceptors in Romania, Foreign Minister Kostyantyn Gryshchenko said May 18. 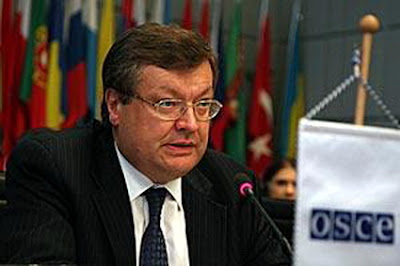 Kostyantyn Gryshchenko
"In the context of the steps taken to consolidate security, we think that the aim should be to reinforce security of Europe as a whole and to take into account all political aspects of this issue," Gryshchenko told a press conference in Bucharest.

"We are interested in having consultations with both our Romanian and our American partners," he added.

Bucharest and Washington two weeks ago concluded talks on the deployment of 24 missile interceptors in a former airbase in southern Romania, Deveselu.

They insisted they would be part of a purely defensive system.

But the agreement angered Moscow, which said it would seek legal guarantees that the United States does not intend to deploy a missile defense system aimed at its strategic nuclear forces.

On May 18, President Dmitry Medvedev warned the West it would face a new Cold War if it failed to address Russia's concerns over this issue.

Medvedev told reporters that the U.S. decision to push ahead with construction of the defense system despite Russia's objections will force Moscow "to take retaliatory measures - something that we would very much rather not do."