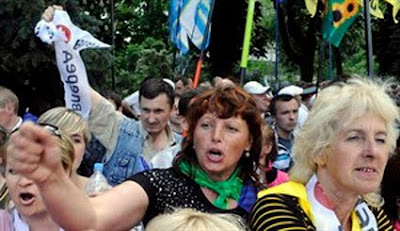 Protesters shout slogans during a protest in front of parliament in Kiev, Ukraine, Thursday, May 19, 2011. Some hundreds of opposition activists in central Kiev are protesting rising prices and demanding higher wages and pensions.
About 1,500 demonstrators gathered outside Ukraine's legislature in central Kiev on Thursday, also urging President Viktor Yanukovych's government to lower household utility bills and taxes.

Electricity and gas bills for Ukrainian families have risen sharply in recent months as the government seeks to reform the natural gas, tax and banking sectors.

The reforms have been set as a condition for receiving International Monetary Fund aid. Ukraine is in desperate need of loans after its economy was very hard hit by the global crisis.

The activists vowed to hold more protests until their demands are met.