May 19, 2011
BRUSSELS, Belgium -- Russian and Ukrainian officials said their relationship with the EU could take the form of a customs union in the next 15 to 20 years, with Russia admitting it was willing to get closer to the Union "as far as possible," excluding only membership. 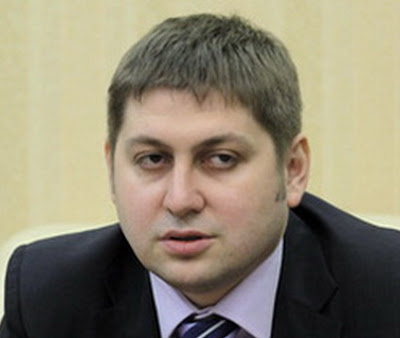 Russia's deputy minister for economic development, Oleg Fomichev.
A panel discussion at the European Business Summit in Brussels yesterday (18 May) took the form of a visionary brainstorming session, resulting in a rather consensual view that Russia, Ukraine and the EU would eventually forge a common economic area in the long run.

Oleg Fomichev, Russia's deputy minister for economic development, said Moscow shared the EU's values and had no problem whatsoever in deepening its relations, including at a political level.

"We want to go as far as possible without being a member of the European Union," he said. Considering Russia's size, which is three times that of the EU, Moscow could not possibly be considered as a potential future EU member, he explained.

Regarding a possible customs union, Fomichev said that a period of 10-15 years was necessary for negotiations, but also for introducing regulations and boosting the competitiveness of Russian industry.

"If you integrate without being ready, you can ruin the whole thing," he warned.

Fomichev described three stages in the development of Russia-EU relations. In the short term, a visa-free regime should be put in place, he said.

In the medium term, the Russian official said a free-trade agreement (FTA) should be introduced, and in the longer term, "maybe in 20 years," a customs union could be set up.

Valerii Pyatnitskiy, deputy economy minister of Ukraine, said relations with the EU were "one of the key priorities" of his country, admitting that a customs union could be set up in the next 15 years.

However, he appeared to indicate that an even closer relationship with the European Union would be possible in the longer term.

"In 10 or 15 years, it won't matter if it is a customs union or another form of integration," he said.

The official also outlined his country's European agenda, saying he hoped that Ukraine's Association Agreement with the EU would be finalised this year.

"We believe that this will be an absolutely comprehensive type of relations. We are talking about the political dimension, justice and home affairs, sectoral cooperation, the establishment of a deep and comprehensive Free Trade Area, about a visa agreement, about approximation of our legislation, and improving the capacity of our institutions and the capacity of our business to compete on the EU internal market," he explained.

Two prominent representatives of the business community who participated in the panel concurred with the idea that putting in place a customs union would take about 15 years.

Andrew Cranston, senior partner in Russia at consulting firm KPMG, said that some sectors of the economy needed time to adapt.

Energy Commissioner Günther Oettinger, who also participated in the debate, insisted that Russia's gas pipeline projects that bypass Ukraine – Nord Stream and South Stream – were "not a solution".

He said that today, 100% of Russia's gas to the EU transited through Ukraine, and "tomorrow", with the pipelines operational, this proportion would rise to 50%.

At the moment, Russia's main economic activity is to produce energy, while Ukraine serves as a transit partner and the EU acts mainly as a buyer, Oettinger pointed out.