May 09, 2011
MOSCOW, rUSSIA -- Victory Day celebrations in Ukraine were darkened by incidents in the ex-Soviet republic's west, where local nationalists engaged in a brawl with WWII veterans in the city center, the Kommersant daily reported. 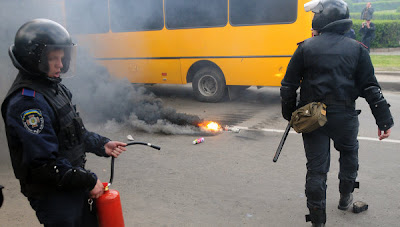 Nationalists spoil WWII victory celebrations in Ukraine.
Members of the Svoboda (Freedom) nationalist organization also trod on a wreath that the Russian consul general in Lvov, Oleg Astakhov, planned to lay at the tombs of soldiers who died during World War II.

Victory Day, celebrated on May 9, marks the final defeat of Nazi Germany by the Soviet Union in World War II, known in Russia and some former Soviet republics as the Great Patriotic War.

This year, the 66th anniversary of the Soviet victory was marked.

A victory parade was held in the Ukrainian capital Kiev on Monday.

Ukrainian President Viktor Yanukovych, who spoke at a rally in downtown Kiev, said: "The victory over fascism is our festival that unites the Ukrainian people."

He warned nationalists against attempts to sow discord in society. "For the sake of cheap popularity, some activists are again trying to split Ukrainians," he said, adding that the government will "properly respond" to such actions.

Viktor Yushchenko, predecessor of pro-Russian Yanukovych, was known for his promotion of Ukrainian nationalism and anti-Russian rhetoric.