May 30, 2011
MOSCOW, Russia -- President Dmitry Medvedev on Monday rejected calls from Ukraine for a cut in the price of natural gas imported from Russia, insisting that 'signed agreements need to be respected.' 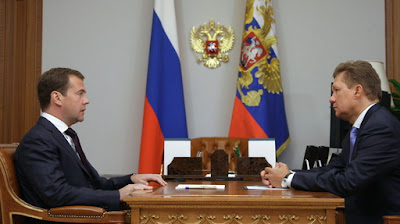 Ukraine has argued that falling international gas prices and soaring profits for the state-controlled gas producer should lead to a revision in the price paid by Ukraine, which is heavily dependent on Russian gas.

Miller said Gazprom could expect record income this year on the strength of a 27-per-cent rise in gas exports for the first five months of 2011, as compared with 2010.

Rising European consumption and instability in some Middle Eastern gas-producing nations were the main drivers of rising demand for Gazprom product, Miller said in comments reported by Interfax.

Gazprom's top strategic goal was increasing delivery capacity to major consumers, he said, with a Baltic Sea pipeline to Germany and a Sea of Okhotsk pipeline aimed at the Japanese market the company's highest-priority projects.

Medvedev said Gazprom's continued strong revenues were critical for the Russian government and advised Miller to discuss price cuts with Kiev only if this were beneficial for Russia.

'Any changes need to be part of a wider agreement,' he said.

Since December, Ukraine has repeatedly called for a reduction in the price paid for gas, pointing to alleged economic damage caused to Ukrainian manufacturers producing mainly for the Russian economy.

In April 2010, Ukraine negotiated a favourable rate of $234 dollars per thousand cubic metres in exchange for a 25-year lease extension for the Russian navy to use to port facilities in Ukraine's Crimean peninsula.

That price in the face of a weakening regional economy is now too high, Kiev officials have said.

Russian officials have said the price is reasonable, but that they would be willing to consider a reduction were Ukraine to agree to turn over ownership of its natural gas transportation network to Gazprom.

Gazprom is Russia's largest company. Disputes between Gazprom and Ukraine over gas pricing sparked a halt to supplies of Russian natural gas to Europe during January 2010.