May 06, 2011
KIEV, Ukraine -- The European Court of Human Rights has already started to consider a complaint by Ukraine's former Interior Minister Yuriy Lutsenko against his illegal arrest, MP Yuriy Hrymchak of the Our Ukraine-People's Self-Defense faction has said on Ukrainian television's Channel 5. 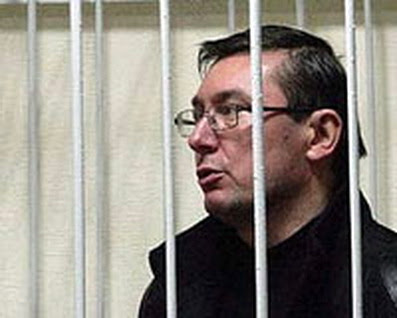 "Today, everything we are getting from the prosecutor's office, we immediately send to the European Court. We have received a refusal by a doctor, which is a violation of UN resolutions. This is Article 91, according to which the investigators should allow medical assistance to be given in prison, and the refusal to provide medical aid is regarded as torture, as a violation of the right not only to freedom, but also to the rights to life and health," he added.

As reported, Kiev Court of Appeals on April 21 extended Lutsenko's arrest until May 26, and after that he announced his intention to go on a hunger strike from April 22.

Lutsenko has been held in Lukyanivka jail since December 26, 2010. He has been charged under Part 5, Article 191 (large-scale embezzlement of state property through the abuse of office, under a preliminary collusion by a group of individuals), Part 3, Article 365 (abuse of office, which led to grave consequences), and Part 3, Article 364 (the abuse of power and office by a law enforcer, which caused damage to citizens' rights as protected by the law) of the Criminal Code of Ukraine.

On January 28, the pre-trail investigation into the criminal case against Lutsenko and three more former officials of the ministry evaluated the losses caused by them to the state at over UAH 970,000 ($99,385).