May 22, 2011
PARIS, France -- Canada's Rebecca Marino opened her French Open main draw with a 6-3, 6-3 victory Sunday over Kateryna Bondarenko of the Ukraine. 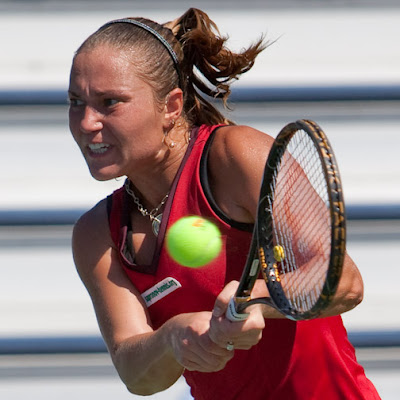 Ukraine's Kateryna Bondarenko.
The 62nd-ranked Vancouver native was making only her second appearance on any court at Roland Garros after losing a qualifying match a year ago.

"I don't think there was anything special I did today. I just felt I served really well, and that always helps me. I played pretty confidently."

But Marino's start in Paris was a solid effort, with the 20-year-old never in troubles against her No. 113-ranked opponent.

The match was only Marino's third at any Grand Slam after winning a round at last year's U.S. Open and again in Australia in January.

Marino reached the second round in just 57 minutes, striking four aces to the four double-faults of Bondarenko.

The Canadian had 13 unforced errors and broke on four of her nine chances while saving the only break point she faced.

Marino earned her first-set break for 5-3 and then served out the set a game later on her way to victory.

"My serve for sure was really working today and my forehand was really good. I had a few really low balls that I didn't think I would put in and made it."

On a packed-out court adjacent to Marino's, Milos Raonic of Thornhill, Ont., practised with top seed Rafael Nadal as the Spaniard prepared for a first-round meeting with American John Isner.

The big Raonic serve is similar to that of the American and gave Nadal a taste of what he would face from a tall right-hander.