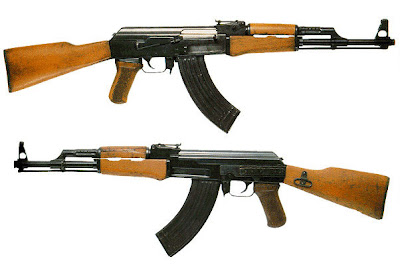 AK-47 assault rifle
Interior Ministry officials in the Ivano-Frankivsk region has said the Trizub (Trident) members arrested on January 10 came to the region from other parts of the country and were armed.

Police say the group had planned to carry out antigovernment acts in the region. They said the activists were being questioned.

On January 10, leaders of Trizub said that at least 10 members of the organization have been arrested this month in connection with damage inflicted on a bust of Soviet leader Josef Stalin in the southwestern city of Zaporizhzhya on December 28.

Trizub claimed responsibility for removing Stalin's head from the bust.

The Trizub is an ancient Ukrainian symbol that was the family crest of the 10th century Prince Volodymyr.

It can be seen in various styles on many things in Ukraine, including on postage stamps and banknotes, and is on the country's coat of arms.