January 21, 2011
KIEV, Ukraine -- Former Ukrainian president Viktor Yushchenko was summoned Thursday before a prosecutor to answer questions about his near-fatal poisoning in 2004. 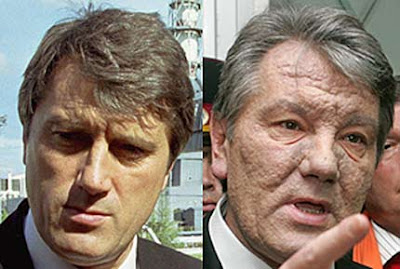 Viktor Yushchenko before and after alleged poisoning.
The pro-Western Yushchenko fell ill to dioxin poisoning in September 2004, less than 60 days before the presidential election he eventually won.

He said at the time he believed his political enemies had attempted to assassinate him to prevent a government with a pro- Western orientation from coming to power.

Government interrogators will question Yushchenko starting Friday. No criminal charges have been made against him, according to a statement from the prosecutor general's office.

The summons comes some two months after Ukraine's pro-Russia government kicked off a controversial anti-corruption campaign that has resulted in the jailing of two former government ministers who served in Yushchneko's administration.

Former prime minister Yulia Tymoshenko - a onetime ally of Yushchenko - has been repeatedly questioned over allegations she misdirected hundreds of millions of dollars of government funds while in office.

She has charged the government is conducting a vendetta against its critics.

Yushchenko has repeatedly accused Ukraine's current leader, President Vitktor Yanukovych, of failing to push for a full investigation into the poisoning because of their political differences.

Yanukovych ran unsuccessfully against Yushchenko in 2004 with the support of then-president Leonid Kuchma and the Kremlin.

Prosecutor General Viktor Pshonka said in December he was not fully convinced Yushchenko had ever been poisoned - a statement Yushchenko later criticized.

Yushchenko's victory in the 2004 presidential race came only after a third vote, conducted when protesters demonstrated against massive fraud in Yanukovych's favour.

Yanukovych won his second attempt at president in 2009.

Richard said…
What else but a stooge government in power could do.
Sounds like like triple witch our grips Ukraine right now.
4:31 AM