January 30, 2011
KIEV, Ukraine -- The eccentric mayor of Kiev Leonid Chernovetsky has failed to appear in public for over two months, prompting even the Ukrainian prime minister to ask where on earth he is. 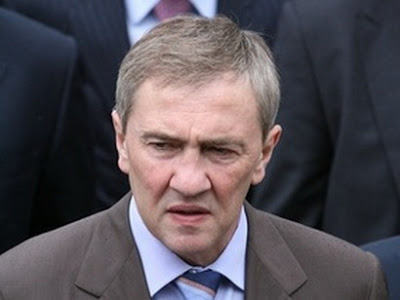 Leonid Chernovetsky
"He is on holiday or what?" Prime Minister Mykola Azarov said Thursday at a meeting with the Kiev city administration chief.

"Without fail, find the mayor, tell him that Kievans are missing him, that they want to see him. And ask him to return to work as soon as possible," said Azarov, a technocrat not known for his sense of humour.

President Viktor Yanukovych in November took away a large chunk of the mayor's powers when he removed Chernovetsky as head of the Kiev city administration and appointed top local official Olexander Popov in his place.

The four-year rule of Chernovetsky -- known as Kosmos for his other-worldly eccentricity -- has been highly colourful even by the standards of charismatic European big city mayors.

Accused of suffering mental problems by his opponents, he once gave a press conference in a pair of swimming briefs and performed a string of exercises to prove his fitness.

He also famously offered to put his kisses up for auction and produce a sequence of record covers.

Popov refused to say where they mayor is, saying the question should be put to Chernovetsky himself. Asked if he had seen the mayor, Popov replied: "We are in communication with him."

Contacted by AFP, the press office of the mayor also said it had no information where he was. Media reports have said he left Ukraine in November to celebrate his 59th birthday in France.