January 28, 2011
NYON, Switzerland -- UEFA warned on Friday that Ukraine's role as joint host of the Euro 2012 finals was in jeopardy as a dispute emerged over government interference in the running of Ukrainian football. 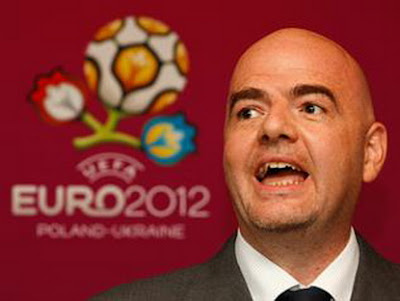 "If the FFU (Ukraine federation) is suspended from membership of UEFA, it was the unanimous view of the executive committee that it would not be tenable to play the final round of the UEFA European football championship in Ukraine in 2012," the letter said.

Ukraine are due to co-host the competition with Poland.

A suspension would sideline Ukranian clubs and the national side from European competitions.

"Essentially it's about political interference in the running of Ukrainian football," Infantino explained after a regular meeting of UEFA's executive committee.

"We have written a letter to the football federation of Ukraine requesting the necessary steps are taken. They will have to conform by February 4," he told journalists.

"If nothing has changed then the emergency committee will have to meet to decide a suspension, or something else."

"But we are confident we can find a solution," he added.

Europe's top international tournament is due to kick off in Warsaw on June 8 next year and end with the final in Ukraine's capital Kiev on July 1.

Preparations for the event have been dogged by doubts since the joint bid by the two countries was chosen by UEFA in 2007, especially over Ukraine's capacity to build up sparse and dilapidated transport and stadium capacity in time.

In April 2010, UEFA chief Michel Platini warned the Ukrainians that if stadium plans in Kiev did not advance they would lose their host status.

However, four months later he said the ultimatum had expired.

Ukrainian officials have said Kiev's stadium should open by August 24.

Infantino said it was too early to speak of playing the final in Poland or other alternatives.

"We have a fantastic event ahead of us, everyone has to pull together and not work one against each other," he added.

Government involvement in the running of football federations is frowned upon in FIFA and UEFA's rule books.

The spat has already had an impact. Ukraine's team was moved into a six strong group for a forthcoming under 21 championship draw instead of a five strong group, to minimise disruption to the tournament if they are suspended.