January 19, 2011
GENEVA, Switzerland -- World sports' top court on Wednesday upheld a decision by European football's ruling body UEFA to ban Ukrainian referee Oleg Oriekhov for life, after he was found to have been involved in match-fixing. 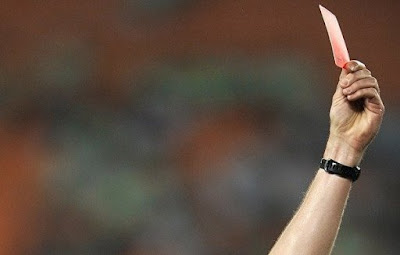 A Ukrainian referee has been banned for his involvement in match-fixing.
The Court of Arbitration for Sport said arbitrators found that "it has been proven beyond reasonable doubt that there were repeated contacts between Oleg Oriekhov and the members of a criminal group involved in match-fixing and betting fraud."

A German-led crackdown against rigged games in nine European countries found that Oriekhov was offered 50,000 euros (66,943 dollars) to manipulate a Europa League tie between FC Basel and CSKA Sofia in November 2009.

The probe by the public prosecutor in the German town of Bochum led to UEFA's decision to impose a life ban on the referee, who then filed an appeal with the Lausanne-based arbitration court.

Although the CAS said it was unable to establish if the match was actually rigged, it noted that Oriekhov failed to report contacts with the criminal group, contrary to conduct expected of a referee.

"The CAS Panel concluded that, in such circumstances, a life ban from any football-related activity was a proportionate sanction," it added.

CAS found that it was "convincingly established" that the referee had contacts with the criminal gang before and after the match in Basel.

In his appeal, the Ukrainian said he did not report the contacts "because of his inadequate command of English and because he was not aware of to whom he should make such a report." Both claims which were rejected by arbitrators.