At The Davos Summit, A Conversation With Ukrainian President Viktor Yanukovych

January 28, 2011
DAVOS, Switzerland -- Is Ukraine's president undermining democracy? That has been a concern for human rights advocates and U.S. officials since current president Viktor Yanukovych took office nearly a year ago. "We don't want Ukraine to become Russia," said a senior U.S. diplomat. 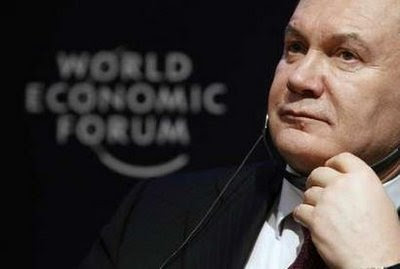 Ukraine's President Viktor Yanukovych attends a session at the World Economic Forum (WEF) in Davos, January 28, 2011. Organisers and CEOs at the annual Davos meeting projected cautious confidence in the global economy as the event opened on Wednesday, pointing to numerous risks which could yet derail a still-fragile recovery.
His chief opponent, former prime minister Yulia Tymoshenko, is under investigation, and there is a question as to whether corruption or revenge lurks behind her case. Washington Post senior associate editor Lally Weymouth spoke with the Ukrainian president in Davos, Switzerland, last week.

An ambition of the previous regime was to join the European Union. Is that still your ambition? How do you think it is going?

Something you need to know is that the Party of Regions, which is the leading party of the Ukraine today, which I still chair, in its very first political statement adopted in 1997, said that the priority of the party is integration of Ukraine with the European Union.

The other important thing - for the first time, in May of last year, the parliament of Ukraine adopted a law which clearly stated that the goal of Ukraine is to join the European Union. The law was the president's initiative.

Some say that your government is moving this country closer to Russia than to the E.U., and they cite the deal you made last April, when you extended the lease on the port in Sevastopol in exchange for getting lower gas prices from Russia. In retrospect, do you feel this was a good deal?

Ukraine and Russia have had traditional strategic relations. There was just one period in the history of our countries - during my predecessor's rule - when those good relations deteriorated. Trade between our countries fell from 40 billion U.S. dollars to 13 billion dollars in 2009.

The confrontation between Ukraine and Russia led - at least two times - to the inefficient delivery of energy through Ukraine to the European Union. At least twice Ukraine violated its obligations to the European Union when gas deliveries from Russia which cross Ukraine were cut down significantly, and Europe suffered.

I thought Russia cut the gas off?

It was the consequence of the fact that relations between Russia and Ukraine had deteriorated. We are speaking about the results, rather than the fact. Ukraine's policy in 2010 was to improve relations with Russia. And Europe is happy today because it doesn't feel [it has] any problems with the natural gas. Those developments have led to more stability and an improved security situation in the European continent.

You won an election that was regarded as one of the most free and fair. S ince that time, there is concern in the West that there has been backsliding on democracy in your country. Experts and officials talk about whether the local elections held i n October were free and fair. How do you see this situation? Do you plan to do something about it?

I have publicly recognized that the Ukrainian election law has some problems.

Your critics also speak of selective prosecutions, and they claim that the current investigations [against politicians] are politically motivated. Why is your government only investigating the opposition?

I would strongly disagree with that suggestion. It is just not true.

The U.S. government says it is true.

In reality, one perhaps should pay less attention to what is said by whom. One has to use the facts. I can give you some of these facts. The country has started a broad campaign against corruption and violation of the law. It is not a selective approach based on political reasons. This campaign affects representatives [regardless of] political party.

Has anyone in your party been investigated?

Yes, by all means.

But the famous names are former prime minister Yulia Tymoshenko and the former minister of the economy, Bohdan Danylyshyn, who fled to the Czech Republic and was given asylum under NATO rules.

Let me answer that. As examples, a member of my party, the former chairman of the parliament of the Autonomous Republic of Crimea - and his position today is an adviser to me - he has been detained on charges of corruption. His last name is Hrytsenko.

Getting back to the former minister of the economy - Mr. Danylyshyn - he had never been involved in politics. He was a minister in the previous government. He is accused of committing some acts of corruption against Ukrainian law.

I believe the Czech decision to grant him political asylum was not based on any specific facts that they received from Ukraine's law enforcement agencies.

What Mr. Danylyshyn should be doing is trying to use his own legal experts to prove that he is innocent instead of hiding and trying to avoid responsibility.

But the U.S. government said that, with few exceptions, the only senior officials being targeted have connections with the previous government. Do you plan to put Yulia Tymoshenko on trial?

It is a controversial issue. With regards to the opinion of the U.S. government, it is an issue to be discussed. We believe that position is not really based on facts. I am sure that if everybody just tried to use the facts and the information that has already been provided by the prosecutor general's office - the information shows that we are in the midst of a major fight against corruption.

Those people that you have referred to have really violated Ukrainian laws. As an example, the member of my party, Mr. [Anatoliy] Hrytsenko, he made those illegal actions back in 2007. So this is also a past deed. Only in 2010, quite a large number of people have been brought to criminal responsibility for acts of corruption.

Many of them are either members of my own party or are members of other parties that are members of the governing coalition. This very fact proves that it is not a one-way road in terms of criminal persecution.

Going back to Yulia Tymoshenko - are you planning on putting her on trial?

I am not planning anything. There are laws, there is a code of criminal procedures in the Ukraine vis a vis which every citizen of Ukraine is equal. Which directions the investigators will take now, it is hard for me to know in advance. Of course I very much want to see Mrs. Tymoshenko prove that she is innocent if she is innocent.

People in the United States are also worried about pressure applied to civil society offices and journalists in your country. They say that they believe the pressure is to suppress any opposition activity. Is this fair?

Perhaps you are aware of some specific facts. What civil organizations are we talking about? What officers?

One journalist disappeared, didn't he?

Many journalists disappear all over the world.

That is something to worry about.

By all means that does worry us, but that was many years ago. The investigation is underway.

I was told that there is a lot of pressure by your security organization on civil societies and human rights organizations. Freedom House downgraded Ukraine from free to partly free. What's going on?

I always react very harshly to any violations of human rights. If I hear that any member of the government or official of the government is involved in any pressure, I look into the issue very carefully, trying to find answers.

I still believe that in many ways, such allegations are an attempt to exercise pressure upon the government - the government which has started this large-scale fight against corruption.

Yes, I do think so. Let me give you another fact. Today the level of confidence and trust of Ukraine is growing in the world. Almost all the credit agencies have upgraded Ukraine's rating today.

During the last year Ukraine climbed 16 positions up, so now we are ranked 69th.That was the highest leap in the world in the course of one year. Today Ukraine finds itself in group two. That's an international evaluation.

There is one other important factor that one has to take into account when thinking about Ukraine today. For the previous 20 years of its independence, Ukraine practically did not modernize itself. No serious reforms were undertaken.

Because throughout those years of independence, Ukraine saw a fierce political fight. There was no stability. When the new president took office in 2010, we finally started global, large-scale reforms. We started the judicial reform, reform of criminal justice, tax reform, public administrative reform.

We are trying to streamline and improve the public finance system. The government's policy is for deregulation of the economy and making the climate for investors more attractive. Clearly this process cannot be completely smooth.

Ukraine has never had a more stable situation than it has today.

How do you see Ukraine's relationship with the United States evolving?

Our relations with the United States are strategic, and on very many issues we are of the same opinion and we support each other.

All of the agreements that were reached last year including at the nuclear summit between President Obama and myself are being implemented almost 100 percent. This is true for the highly enriched uranium program.

The same is true about the removal and destruction of missile fuel and so on. We have a broad agenda between our two countries, and this broad agenda shows that relations between us are good and stable.