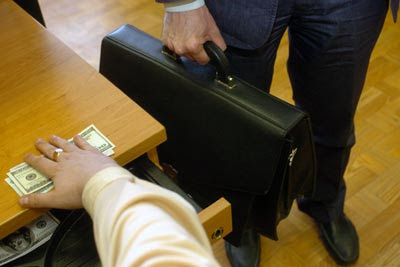 Aid has failed to fix corruption in Ukraine, according to the OECD.
"Ukraine has made little progress in tackling corruption over the past four years, despite regular pledges from the country's leaders to take action," said the Paris-based Organization for Economic Co-operation and Development, an economic and social policy research agency funded by Canada and 33 other western democratic countries.

And the OECD analysis said foreign-aid programs directed at reducing the country's tainted system of government have largely failed.

"International partners have also confirmed that several large anti-corruption programs supported by donors and international organizations during several past years did not produce many practical results," said the report, which didn't identify those partners.

"Donors are therefore looking for the confirmation of political will of the Ukrainian leadership to fight corruption in order to consider any further support."

The criticism is directed both at the new regime headed by President Viktor Yanukovych, elected in early 2010, and former president and 2004 Orange Revolution hero Viktor Yushchenko, who addressed Parliament in 2008 at the invitation of Prime Minister Stephen Harper.

Yushchenko told a news conference after that address that corruption was a problem in his country, blaming it on the "heavy heritage" of Soviet rule before Ukraine achieved independence in 1991.

Ukraine's failings have made it tough for foreign investors to operate in the country of 45 million people.

"General lack of legal certainty is the fundamental challenge for doing business in Ukraine. One of the business representatives interviewed during the on-site visit stated that companies in Ukraine had to accept corruption, or they were out of business," according to the OECD.

In 2009, Canada made Ukraine the only European country among 20 nations or regions on a foreign-aid priority list. Canadian aid totalled $21.3 million in 2008-2009, making it the country's fourth-largest bilateral aid donor.