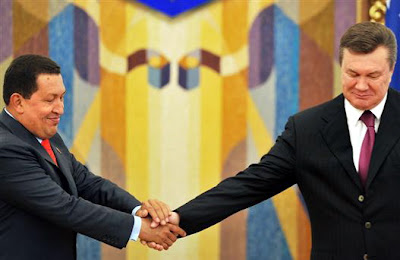 Ukrainian President Viktor Yanukovych (R) shakes hands with his Venezuelan counterpart, Hugo Chavez, after their press conference in Kiev.
Speaking after a meeting with visiting Venezuelan leader Hugo Chavez, Yanukovych said such projects would be a top priority for the two countries. There were no other details.

Yanukovych also said Ukraine would soon begin to transport Venezuelan oil to Belarus via an oil pipeline, but again there was no elaboration.

Ukraine currently receives Venezuelan oil by sea and then ships it to Belarus by rail.

Belarus, which has increasingly tense relations with Russia, is eager to diversify its oil supplies.

Ukraine has enjoyed friendly relations with Russia since Yanukovych's election in February, but is also interested in developing alternative energy assets.

Chavez and Yanukovych said during their talks in Kiev, the Ukrainian capital, that they hope to open embassies in each other's capitals soon to deepen cooperation.

Chavez also toured an Antonov airplane factory in Kiev on Monday. The state-run Venezuelan News Agency reported that Chavez's government is considering the possibility of buying two An-74 planes for transport and marine patrol uses.

The Venezuelan leader made his first visit to Ukraine after stops in Russia and Belarus. He is next expected to visit Iran, Syria, Libya and Portugal.