October 24, 2010
WARSAW, Poland -- When elections produced a change of government in Kiev earlier this year, many people seem to have concluded Europe and America had “lost” Ukraine, and that the democratic gains of its Orange Revolution would soon be reversed. 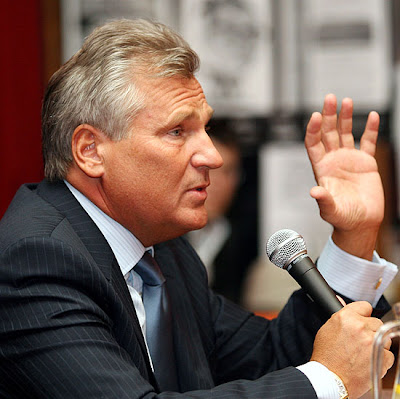 Aleksander Kwasniewski, President of Poland from 1995 to 2005, wrote this article.
But several months later it is clear the approach of Ukraine’s new government is more pragmatic and reform-minded than most people expected. Provided the west can frame the right policies, the scope for encouraging change through engagement is still considerable.

The idea that the new president, Viktor Yanukovich, would be little more than a cipher for Russian interests was always based on a crude misreading of Ukrainian politics. Although his party draws the bulk of its support from Russian-speaking regions, linguistic factors are less significant than they appear.

For a range of economic and political reasons, Yanukovich and his backers remain committed to Ukraine’s independence as much as the rest of the country.

The decision to seek warmer relations with Russia by cancelling plans to join NATO and extending the lease of the Black Sea fleet should not therefore be seen as part of a return to Moscow’s orbit. It reflects a pragmatic judgement that Ukraine, situated between the European Union and Russia, needs friendly relations with both neighbours.

It should be noted that in rebalancing his foreign policy Mr Yanukovich has declined Russian proposals for joint control of Ukraine’s gas supply network, and talked of his desire for closer economic integration with the EU.

The removal of Ukraine as a potential theatre of geopolitical competition is something the EU should welcome. If the hoped for EU-Ukraine free trade zone is established, it will exert more influence over Russia if it is carried out by a Ukrainian government deemed not to be hostile to Russian interests.

As Russia looks for its own path towards economic modernisation, a prosperous Ukraine could also help Moscow overcome its assumption that economic and political reform also implies a culturally threatening process of westernisation.

Despite being among the hardest hit by the global economic crisis, Ukraine has recovered well, and is once again growing. Dominique Strauss-Kahn, head of the International Monetary Fund, recently praised efforts to improve the country’s fiscal position, strengthen financial institutions, increase central bank independence and modernise the energy sector.

Market sentiment appears to be following with improved credit ratings and two successful bond issues. Efforts must now be made to put in place the kind of structural reforms required for the coming free trade zone. The government’s recent decision to remove public officials from the process of issuing permits is a signal that it is also moving to tackle corruption.

Many of these IMF-sponsored reforms have been possible because the institutions of the Ukrainian government appear to be functioning rather better than at many times in the recent past. The decision to annul the constitutional reforms of 2004 and revert to a presidential form of government has been interpreted in the west as a step backwards, but in fact it has reduced the scope for political gridlock.

Of course, the danger of authoritarianism should not be dismissed lightly, especially given the country’s history. However, there is no reason in principle why the current governance arrangement should not be both efficient and accountable, in the way of other European democracies. The key is maintaining a proper separation of powers and a system of multi-party elections that is open and competitive.

President Yanukovich insists that his government intends to respect European democratic norms, while his opponents claim he is undermining political freedoms ahead of local elections later this month. Criticism has also been levelled at the new electoral law, the early drafts of which appeared unduly restrictive.

But what is most encouraging about the Ukrainian response has been its willingness to listen to the concerns of opposition parties and international observers, and make changes. By removing the rule that parties registered less than a year in advance would be ineligible to stand as candidates, for instance, voters will have more choice and elections will be more competitive.

We must, of course, wait to see how the forthcoming elections are conducted in practice. One of the positive measures introduced by the new law is an increased the role for independent election monitors. This, together with the fact that the government has secured more international observers, will mean these local elections will at least be carefully scrutinised.

The message from the EU should be that Ukraine’s efforts to modernise its economy and integrate more closely with the rest of Europe must go hand in hand with a commitment to democracy and human rights.

The Ukrainian business elite that helped to put the new government in power understands that Ukraine’s future lies in being part of a wider European market. That gives the EU an opportunity to help Ukraine make the changes it needs. It is influence we must use with renewed focus.