October 05, 2010
KIEV, Ukraine -- Mini skirts and high heels were banned in the high corridors of Ukrainian government on Tuesday, as a new dress code went into effect. 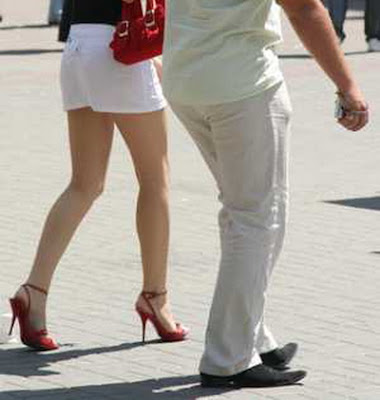 "Devuskha Style" on Kiev's main street Khreshchatyk.
New regulations published by Ukraine's cabinet of ministers instructed female government workers they should maintain 'a professional appearance at all times' and as such should wear moderate heels, minimal makeup, and limited perfume.

Ruffled dresses, transparent materials, and outfits displaying excessive leg or cleavage were also fashion choices contrary to the image of a responsible public servant, and should not be worn at work, according to the regulations.

Ukrainian female fashion is generally more daring than in western Europe or the United States, with stiletto heels, heavy makeup, and figure-hugging attire routinely seen on streets and offices in major cities.

Guidelines stipulating male government workers employed in Ukraine's cabinet of ministers, and within the presidential administration, should should wear a jacket and tie have been in effect since pro-Russia president Viktor Yanukovych came to power in February 2009.

'I think it (the cabinet of ministers' mandating a dress code for female workers) looks rather archaic,' Anna German, spokeswoman for Ukrainian President Viktor Yanukovych, told the Interfax news agency.

'If such a person has no sense of moderation, you have to ask, should he really be in the office?' she added.

Yanukovych's critics have accused him of trying to establish an authoritarian government in Ukraine. He denies the allegation.

Ukraine's supreme court last week dramatically increased Yanukovych's power by cancelling constitutional amendments effective since 2004 aimed at reducing the power of the executive branch, in favour of the legislature.

The constitution currently effective in Ukraine, dating back to 1996, gives the president much wider authority, including the ability to hire and fire all executive branch officials.