October 15, 2010
KIEV, Ukraine -- Three Ukrainian doctors have been charged with removing kidneys from victims of human trafficking for sale to wealthy foreigners for up to $200,000 US per kidney, Ukraine’s interior ministry said on Friday. 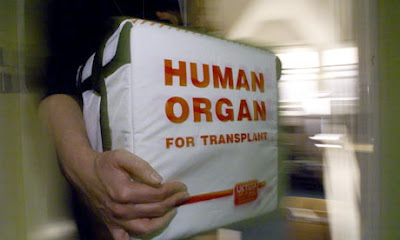 The doctors, who have been arrested, “were part of an international criminal group whose members had for a long time trafficked people from Ukraine into one of the southern ex-Soviet nations,” it said in a statement.

It said authorities had identified more than 30 victims of the alleged illegal transplant ring, including “citizens of Ukraine, Moldova and Uzbekistan who had been trafficked abroad.

“(Each of them) came back home without a kidney, thus becoming disabled,” the ministry statement said.

The ministry did not name the country where the organs were removed from the victims or say whether the buyers travelled there for transplants.

Most of the recipients were from a country where Ukrainians had “emigrated en masse in the early 1990s”, it said, in a possible reference to Israel.

The Interior Ministry said suspected members of the crime ring had bought real estate worth over $1 million apiece and spent lavishly on luxury cars and trips abroad.

If convicted, the doctors face prison terms of up to 12 years.