October 19, 2010
PRAGUE, Czech Republic -- Police in the Czech Republic say they have arrested former Ukrainian Economy Minister Bohdan Danylyshyn on the basis of an international warrant alleging abuses while in office. 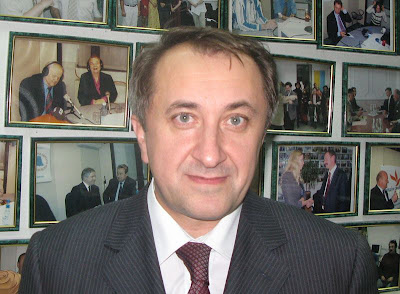 He is the most senior Tymoshenko-era official to be accused of a crime since Viktor Yanukovych defeated her in a two-way presidential runoff in February.

Since Yanukovych took office, Ukrainian authorities have also detained a former director of customs under Tymoshenko's administration and a former CEO of state-run energy giant Naftogaz.

Danylyshyn was detained late on October 18, according to Czech Police.

"Basically, the international arrest warrant states a suspicion of committing the crime of failing to execute [his] responsibilities in the management of another party's property and that this occurred in the year 2007, when the man was alleged to have given preference to one of the firms [in a tender] and allegedly inflicted damages on Ukraine of more than 1.3 million euros," Czech Police spokeswoman Pavla Kopecka told RFE/RL's Ukrainian Service.

The charges, filed in August, stem from alleged actions during the sale of assets of Boryspil International Airport.

Kopecka added that there has been no decision yet on whether Danylyshyn would be handed over to Ukrainian authorities.