September 17, 2010
KIEV, Ukraine -- Opposition leader Yulia Tymoshenko on Friday accused Ukraine's SBU security services (known as the KGB in Soviet times) of pressuring members of her party and said a threatening caller had warned her she would "spit blood". 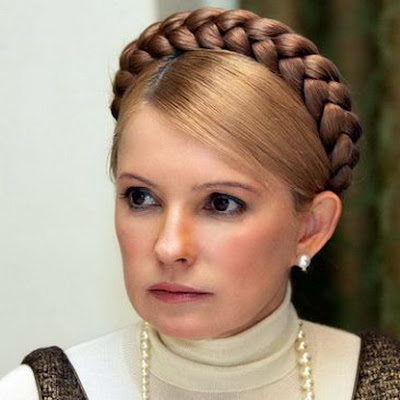 Ukrainian opposition leader Yulia Tymoshenko.
The glamorous ex-prime minister said the security service had summoned one of the leaders of her political party, Olexander Turchynov, for questioning on Friday, denouncing the move as a political strategy of intimidation.

"Today they started to terrorise Turchynov and summoned him to the SBU... the people who work or live with him are now terrorised," she told journalists.

Ukraine's SBU chief Valery Khoroshkovsky was quoted by Russian news agencies as saying that the summons were linked to a probe into alleged irregularities over gas imports.

Turchynov, who served as deputy prime minister in the Tymoshenko's government and is one of her closest confidantes, had already been questioned by the SBU in September as a witness in the probe.

"I received a phone call from an unknown man who... said I would not be allowed to humiliate Viktor Fedorovych (Yanukovych) without impunity," Tymoshenko said in comments posted earlier on her party's website.

"He also said 'I would spit blood' and Turchynov would be arrested as retribution."

Tymoshenko dismissed an offer by Yanukovych to increase her security detail following the incident as a "joke" -- hinting that he was using surveillance by the Ukrainian Security Services (SBU) as a political tool.

"All those offers by Yanukovych to strengthen my security sound like a joke," Tymoshenko told reporters Friday. "They are watching me 24-hours a day. They've tapped all my phones."

Pro-Western Tymoshenko has in recent months repeatedly denounced creeping authoritarianism under Kremlin favorite Yanukovych, who has swung the country towards Russia since taking power earlier this year.

But the president has dismissed the allegations and insisted he is fully committed to Ukraine's democracy and independence.

The probe involving Turchynov delves into a complex controversy with an intermediary firm named RosUkrEnergo surrounding the ownership of gas stored in Ukrainian reservoirs after Kiev's winter 2009 gas conflict with Russia.

RosUkrEnergo has been locked in a long-running feud with Tymoshenko and her supporters.

Web Experts UK said…
That is something done for the first time in a country like Russia. In KGB times this was the common practice of ruling party. This problem can only solved by sorting out the structure of government and establishment.

System followed in most of the European countries would not allow such activity, even their system would not allow any high profile personnel to hire manned guards Manchester on their own.
5:07 AM