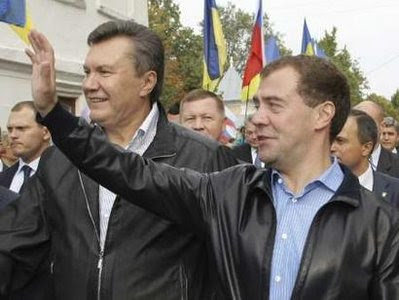 Russia's President Dmitry Medvedev (R) and his Ukrainian counterpart Viktor Yanukovich walk after arriving at the bordertown of Glukhov September 17, 2010.
'The bureaucracy as it currently exists does not allow people to live normally, to meet with each other,' Yanukovych said, according to a Korrespondent web magazine report. 'We must battle against this,' he added.

Yanukovych made the comments during a meeting with reporters at Medvedev's country residence, outside the Russian city Tver'.

It was the second day of a series of high-profile talks between the two devoted to bilateral relations, and played up on the national television channels of both countries as a friendly meeting between allies.

Better trade and communications between Russia and Ukraine are critical for economic development, and a long delays at border crossings were hindering growth, Yanukovych said.

'We need to build hundreds of pedestrian crossing points,' he said. 'Getting from one country to the other in recent years has taken going through a lot of red tape.'

Yanukovych won election as Ukraine's chief executive in October, running in part on a ticket of reversing the previous administration's hostile stance towards the Kremlin.

Trade between Russia and Ukraine increased by 70 per cent in the first six months of 2010 to a value of $20 billion dollars, thanks in substantial part to the removal of excise barriers between the two countries, Yanukovuych said, according to a Unian news agency report.

'Goods are now moving, and business now is aware that there have been serious political decisions made to support trade,' he said. 'There was a time when both sides used them (excise taxes) against each other ... but those times are past.'