September 24, 2010
KIEV, Ukraine -- Ukrainian President Viktor Yanukovych moved to tighten his control further Thursday when a top court considered proposals by allies that could secure him new powers to name his own government. 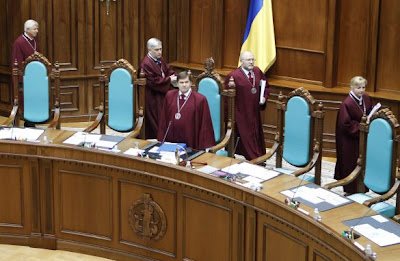 Ukrainian Constitutional Court judges preparing to study reforms that would boost Yanukovych’s powers Thursday.
If the Constitutional Court rules in favor of the proposal, Yanukovych, who has quickly consolidated power since taking office in February, will rule in a presidential system like that of many other former Soviet republics, including Russia.

The court’s 18 judges were being asked to find that political reform, carried out during the 2004 upheaval of the Orange Revolution that brought Viktor Yushchenko to power, was unconstitutional.

Those reforms — supported by Yanukovych’s camp at the time to frustrate Yushchenko once he took over — shifted some presidential powers to the parliament, notably the right to name the prime minister and most Cabinet members.

The curbs limited Yushchenko’s effectiveness as president and set up a confrontation with the parliament and his prime minister, Yulia Tymoshenko. The wrangling paralyzed decision-making and ultimately contributed to Yushchenko’s downfall in this year’s election.

Independent Ukrainian media were quick to point out that during Yushchenko’s term in office, Yanukovych had strongly opposed attempts to reverse the reforms.

“Most of the society would perceive an attempt to cancel the [2004] political reform as a return to the totalitarian era and would never allow that,” Yanukovych, then a prime -minister, said in a newspaper interview in June 2007, according to the government web site Kmu.gov.ua.

“Nobody should have a monopoly on power, nobody can attempt to usurp power. This can only be achieved under the parliamentary-presidential system.”

On Thursday, Olena Lukash, a lawyer representing Yanukovych to the court, used a different language.

“Confrontation at the top levels of power was caused not only by the weakness of the team, but by those amendments to the constitution which had upset its balance,” Lukash told judges.

Many say the court is weighted heavily in Yanukovych’s favor and it is expected, ultimately, to rule the 2004 amendments void after several days of deliberations.

In the short term, this would have implications for the status of the present government — elected according to 2004 rules — and many say the court would also have to recommend legislation to prevent a descent into constitutional chaos.

“Have you considered the legal consequences if we come to the conclusion that this law must be recognized as unconstitutional?” court judge Viktor Sishkin asked one deputy who presented the appeal for the 2004 to be quashed.

The Constitutional Court has to hand down its ruling by the end of next month.