September 09, 2010
KIEV, Ukraine -- Ukraine’s hryvnia may slide at least 20 percent against the dollar as the International Monetary Fund pushes the country to accept greater exchange-rate flexibility and banks and businesses convert a backlog of the currency, according to Commerzbank AG. 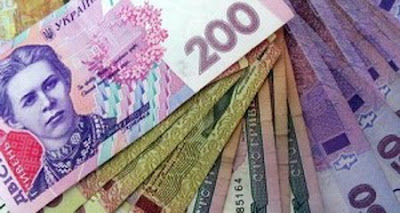 Ukrainian currency
The IMF approved a $15.2 billion loan for Ukraine in July, its second for the former Soviet republic since 2008, with disbursement linked to conditions including steps toward a flexible currency regime.

The central bank has been “more hands off” in its actions in the past two weeks after buying and selling dollars almost every day to keep the hryvnia around 7.9 per dollar through June and July, Alexander Valchyshen, head of research at Investment Capital Ukraine in Kiev, said in an interview yesterday.

The hryvnia gained 0.1 percent to 7.9200 as of 12:18 p.m. in Kiev, after tumbling 1.4 percent yesterday, its first one-day move of more than 1 percent since December, according to data compiled by Bloomberg. The currency lost 35 percent versus the dollar in 2008 and 2.9 percent last year.

“If they float it now a huge amount of money will flow out of Ukraine. Every Ukrainian company and household that hasn’t been able to convert will take to the market.”

The currency may depreciate to “double digits” of at least 10 per dollar should greater flexibility be allowed, Leuchtmann said. “There’s a lot of volume of capital wanting to get out of Ukraine that hasn’t been able to,” he said.

The hryvnia “will not be weaker” than 8 per dollar by the end of the year, National Bank Governor Volodymyr Stelmakh said yesterday. Policy makers intend to continue their intervention policy, he said.

As the economy shrank 15 percent in 2009, the central bank ordered lenders not to trade the hryvnia weaker than the daily level it set, and trading of hryvnia for future settlement was banned. Companies seeking dollars to repay foreign debt had to prove the original loan was converted to hryvnia.

Ukraine’s currency has become more volatile this week as NAK Naftogaz Ukrainy, the state energy company, decided to convert hryvnia to dollars on the open market to make its monthly payment for gas to Russian monopoly OAO Gazprom, said Jathan Tucker, head of trading in Kiev at Bank of Georgia JSC.

This drew the central bank on to the market and spurred Stelmakh’s comments, he said.

“This guy is young and relatively inexperienced and so it’s just reinforced the risk of holding hryvnia assets,” Valchysen said.

Arbuzov, former chairman of lender Ukrbiznesbank, is close to President Viktor Yanukovych and his appointment indicates the president is seeking to gain greater control over the central bank, Alexander Pecherytsyn, head of research in Kiev at ING Groep NV, wrote in a client note two days after the new deputy governor’s appointment.

BNP Paribas SA and ING expect the hryvnia to depreciate to 8 per dollar, as speculation of another global slowdown spurs investors to avoid riskier emerging-market assets.

“The stage is set for stronger dollar demand across the board,” said Elisabeth Gruie, an emerging-market currency strategist in London for BNP Paribas, France’s largest bank. “The IMF deal means they have to allow more flexibility and the question is how they’ll deliver on that.”

Thanos Arvanitis, chief of the IMF’s Ukraine mission, and Max Alier, the Washington-based lender’s representative to the country, weren’t available for comment, according the fund’s press service.

The requirement for a flexible exchange-rate was also included among conditions for Ukraine’s $16.4 billion loan from the IMF in 2008. Forcing this requirement during the country’s recession and amid the shortage of global credit would have triggered a “huge currency devaluation,” Commerzbank’s Leuchtmann said.