September 30, 2010
KIEV, Ukraine -- Those who think the French pension system is bloated should take a look at Ukraine, a nation which has not only preserved but enhanced generous Soviet retirement benefits -- which now threaten to bankrupt it. 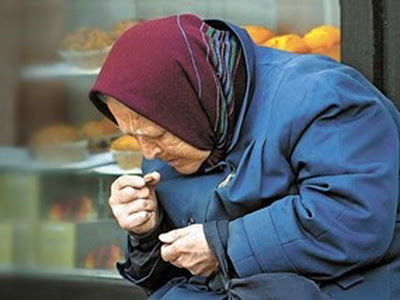 Some elderly, on pension in Ukraine, are forced to beg in order to make ends meet.
Street protests might come easier to the French than they do to the Ukrainians. But the government of President Viktor Yanukovich, who is being urged to raise the retirement age to 65years for men and women, is still wary of a possible backlash.

Relatively small on an individual basis -- about $140 a month on average -- total pension expenditure is a big burden on the ex-Soviet republic's budget, making up 18 percent of gross domestic product in 2009, one of the highest rates in Europe.

Ukraine's aging population means the system's financing needs will only increase unless it is changed. There are already nine pensioners for every 10 working people paying into the pension fund in Ukraine -- and this ratio is set to get worse.

"No system can withstand those demographic trends," said Marcin Swiecicki, director of EU-sponsored think tank Blue Ribbon Analytical and Advisory Centre. "This would be a financial catastrophe."

The World Bank said in a report this month that fiscal reform, which includes an overhaul of the system, was "the most urgent priority" for Ukraine.

Ukraine was taxing payrolls at 35 percent in order to finance pensions -- "one of the highest rates in the world",Swiecicki said.

But even that is not enough. Without reforms, by 2050,Ukraine will have to reduce its average pension to 28 percent o fthe average wage from the current 40 percent.

And if it wants to keep pensions at the same level, the nation will have to raise the retirement age to 65 years for both men and women. Under the current rules, Ukrainian men can retire at 60 while women retire at 55.

"Ukrainian women hold the world record in correlation between the length of retirement and the work period needed to obtain a pension: 7.1 years of staying retired for every 10 years of work," Swiecicki said.

That compares to 6.2 years in Italy and just 4.6 years in Germany, according to Blue Ribbon data.

Among other worries are the disparity between pensions indifferent sectors -- miners and military officers, for example,enjoy much higher benefits than an average pensioner -- and the fact that only 75 percent of workers pay pension contributions.

In his long-term reform programme announced this year,President Viktor Yanukovich promised to radically change the pension system by switching to an accumulative system used in countries like Chile and ex-Soviet peers Russia and Kazakhstan.

But the government has so far committed only to gradually raising women's retirement age to 60, as spellt out by its $15 billion deal with the International Monetary Fund made in July.

It also plans to reduce early retirement benefits and increase the qualification period for full benefits by 10 years.

"This is not a complete solution but it represents a significant step forward," said Blue Ribbon's Swiecicki.

The plans have not been clearly articulated at home. The Yanukovich government has prudently shelved discussion of the issue until after the October 31 regional elections so as not to damage his Regions Party's prospects at the poll.

However, signaling that even modest reform plans could be reviewed, Deputy Prime Minister Sergei Tigipko said this month the government would try to avoid retirement age adjustments --a policy that could displease the IMF.

"If we find ways to compensate (growing pension expenditures) without raising the retirement age, we will not raise it," Tigipko told reporters.

"If we don't find ways to compensate we must stimulate people to continue working -- by enabling them to earn more for working every additional year and so on."