September 28, 2010
KIEV, Ukraine -- The president of Poland and Ukraine's prime minister joined victims' relatives to honor thousands of Polish officers killed by the Soviet secret police 70 years ago in the Katyn massacre. 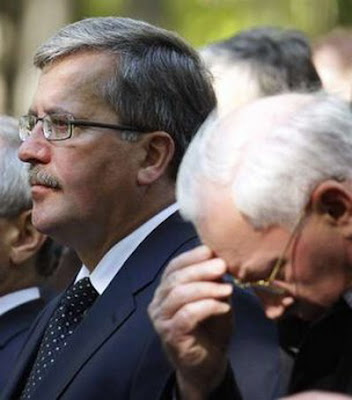 Poland's President Bronislaw Komorowski (L) and Ukraine's Prime Minister Mykola Azarov (R) attend a ceremony commemorating the massacre of thousands of Polish officers killed in 1940 by the Soviet secret police.
Polish President Bronislaw Komorowski and Ukrainian Prime Minister Mykola Azarov on Saturday laid wreaths at a former prison building in the Ukrainian city of Kharkiv, close to the Russian border, where many of the officers were murdered.

"I would like very much for us to have the possibility here in Kharkiv, as well as in other places, to retain both personal and collective memory of those killed by this totalitarian regime," Komorowski said.

Some 400 relatives of the Polish victims joined the commemoration, which included visiting a cemetery where about 3,800 of the victims are buried.

The Nazis discovered the mass graves of the officers in the Katyn forest during their march on Moscow in the fall of 1941. Soviet propaganda blamed the deaths on Adolf Hitler and punished anyone speaking the truth with harsh prison terms.

In 1990, Moscow acknowledged that dictator Josef Stalin's feared NKVD secret police -- the precursor to the KGB -- were responsible.

Katyn inadvertently drew international attention this April when then-Polish President Lech Kaczynski, his wife Maria and all 94 other top Polish civilian and military officials heading for a Katyn commemoration died in a plane crash near Smolensk airport.